State continues to shiver in MP; Bhopal in grip of icy winds, no immediate relief 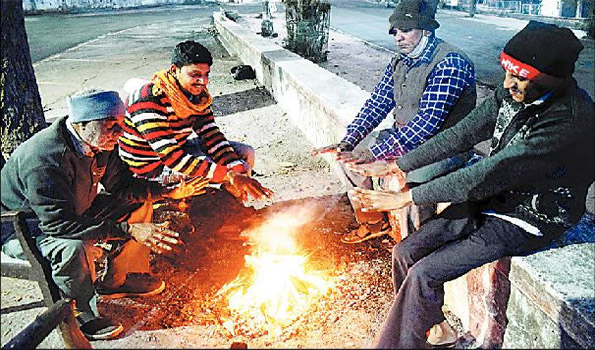 Chronicle Reporter, Bhopal
There is no possibility of immediate relief from the cold in Madhya Pradesh. The entire state including Bhopal-Indore is shivering due to cold. In some places in the state, the mercury went up to 2.5 degree Celsius. In Raisen, the dew drops got frozen on the plants. It will be cold for the next 24 hours. On January 29, there will be another gust of wind from Pakistan (Western Disturbance). Due to this there may be some increase in temperature for six days. The night temperature will reach 10 degrees and the daytime 24-25 degrees Celsius.
After this, from February 2, another system will be activated in the state, due to which light rain will again cause severe cold. Its effect will also last for 2 to three days. There will be no cold days, but cold waves will definitely continue. This can lead to increased chills during the day.

Mercury below 6 degrees across state
Last night, the night temperature across the state went down to less than 7 degree Celsius. In Pachmarhi, the night temperature was recorded at 1.5 degree Celsius and in Raisen 3.5 degree Celsius. Barring a few areas, it is freezing cold in most of the state. The mercury in Betul, Bhopal, Datia, Dhar, Guna Gwalior, Indore, Khandwa, Khargone, Ratlam, Shajpur, Ujjain, Chhindwara, Damoh, Jabalpur, Khajuraho, Mandla, Naugaon, Rewa, Sagar, Tikamgarh and Umaria was between 4 degree Celsius and 7 degree Celsius. Narsinghpur and Seoni recorded the highest minimum temperature of 11 degree Celsius.
Meteorologist PK Saha said that it is snowing heavily in the north. The winds coming from Afghanistan through Pakistan become cold and moist due to snowfall from the north. It is raining in the plains. For the first time, its maximum effect is visible in Madhya Pradesh. Till now its effect used to be more on Gwalior-Chambal, but this year it is affecting the whole of Madhya Pradesh. The cold season is not ending due to the continuous coming of the winds.

Some relief from Jan 29
There will be some relief from cold from January 29. The weather will remain mild till February 2, but after that the weather will change again. The day will be cold and rainy with cloud cover. The night temperature will drop as soon as the clouds clear. There is a possibility of rain and hail again in the second week of February.
PK Saha said that the way it is getting cold, it is pointing towards climate change. This time there is record snowfall in the north. Rajasthan and Uttar Pradesh were affected the most by the winds coming from Pakistan. In Madhya Pradesh its effect so far was seen only in Gwalior-Chambal areas. Now its scope has expanded. Apart from Bhopal, it has been seen in the form of rain in Indore. It is freezing cold in almost all the areas of Madhya Pradesh.