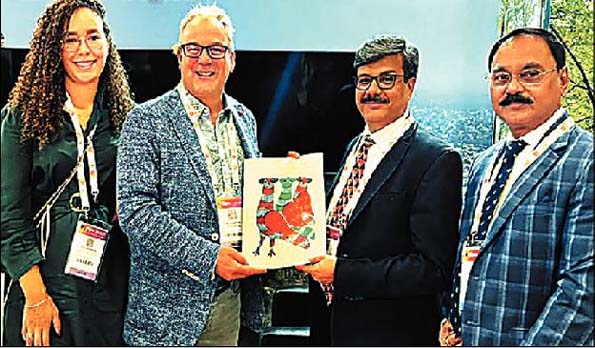 Chronicle Reporter, Bhopal
Madhya Pradesh Tourism Board (MPTB) has participated in International and French Travel Market (IFTM) TOP RESA at Port de Versailles, Paris.
The delegation of Madhya Pradesh was led by Shiv Shekhar Shukla, Principal Secretary, Tourism Department and Managing Director, Madhya Pradesh Tourism Board. Various stakeholders including leading tour operators, travel agents from across the world participated in the Travel Mart. This event ran from 20-22 September. On the first day, Principal Secretary Shukla held several important meetings with the stakeholders related to the tourism sector of Europe and shared information about the tourism potential in the state with the French media. Representatives of more than 200 countries were present. Representatives of more than 200countries and more than 1700 brands were present in the exhibition. More than 34,000 tourism professionals participated and 150 conference sessions were held. Displaying the rich heritage of Madhya Pradesh, Shukla said, Madhya Pradesh is called the heart of India. It is a prosperous state from the point of view of tourism