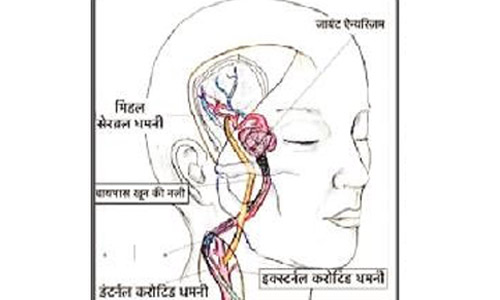 Chronicle Reporter, Bhopal
Neuro Surgery Department of G Subhash Chandra Bose Medical College Super Specialty Hospital created history. State's first brain bypass operation was conducted here. In a complex operation that lasted about eight hours, the vein of a leg of a 36-year-old woman from Gwalior was removed and fixed to the brain vein. After which a new path was made for the circulation of blood in the patient's brain.
It is said that the condition of the woman is fine now and she will be discharged soon. According to the information received, a 36-year-old woman resident of Gwalior had a CT scan done by the doctors there when she had headache and brain hemorrhage. This showed that a large balloon called a giant aneurysm had formed in the main vein on the left side of the brain (internal carotid artery). Due to its burst, the patient has risk of life due to brain hemorrhage. The doctors there had advised to take him to Delhi AIIMS. Some relatives of the woman live in Jabalpur. The woman was called to show in the super specialty. Dr. Yadav examined the patient and got the brain angiography done, which confirmed the giant aneurysm. The team of Neuro Surgeon, Intervention Neuroscience and Neuro Anesthesia experts led by Senior Neuro Surgeon Dr. YR Yadav has successfully completed ECIC High flow Bypass.
Complicated operation conducted in this way
In this operation, the blood vessel (Great saphenous vein) of the leg commonly used in heart bypass was removed with the help of a vascular surgeon. Then it was grafted from the left side of the neck by the neurosurgery team from the large blood vein (external carotid artery) to the brain vein (middle cerebral artery) with very fine sutures with the help of an advanced microscope. This is called high flow EC-IC bypass operation. Along with this, the giant aneurysm of the blood vessel of the patient's brain was closed. After the operation, with the help of a highly advanced microscope, the patient was again had angiography on the operating table and blood circulation was checked in the newly created way.
Patient will be discharged soon
The operation has been conducted completely free of cost under the Ayushman scheme. The patient's health is continuously improving. Dr. Pradeep Kasar, Dean of Medical, Dr. Jitendra Gupta, Superintendent of Super Specialty Hospital, Neuro Surgery Team, Intervention Neuroscience, Neuroanaesthesia and Vascular Surgery team have supported.