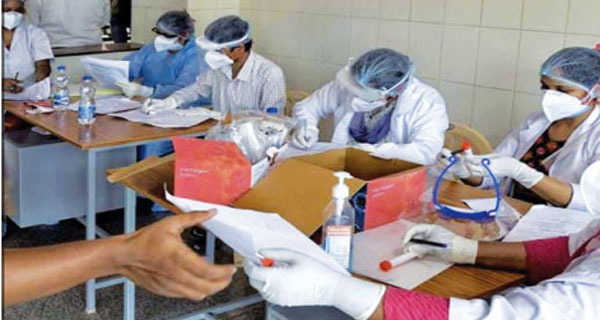 Registering a record single day spike once again, this time with 6654 fresh infections in past one day, India’s COVID tally reached 1,25,101 on Saturday morning, a Health Ministry update said here. Death toll across the country mounted to 3720 with 137 more people succumbing to the highly contagious virus.

On a positive note, 3249 people have been added to the total number of recovered cases in the past 24 hours, taking the count to 51783. Cases under active medical supervision at present are 69597, as per the government update. Maharashtra with the tallest figure of infections in the country, witnessed a fresh spike of 2940 cases, taking the tally to 44582.

The state’s death toll now stands at 1517 after 63 more people succumbed to the lethal virus. According to the health update, 12,583 patients have recovered so far in the state which is bearing the maximum load of the virus spread. Tamil Nadu having recorded the second-highest number of cases now houses 14753 infections, while 98 lives have been claimed so far by the virus spread in the state. In Gujarat, the tally has now reached 13268 after addition of 363 cases since Wednesday, while the death toll has increased to 802. So far, 5,219 cases have been cured and discharged in the state.

As per the Health Ministry data, national capital witnessed a sharp surge of 660 infections and now houses 12319 cases, while 208 people have died so far in Delhi due to the infection. Meanwhile, Rajasthan now has 6,494 cases, 153 deaths and 3,680 patients have recovered so far. Madhya Pradesh’s tally has now increased to 6170 after 189 fresh cases. Death toll in MP at present stands at 272, and 3089 have been cured, as of now.

The largest northern state Uttar Pradesh has added 220 fresh cases in the past 24 hours, taking the tally to 5,735. With 14 fresh deaths, the total number of fatalities has now increased to 152, while 3,238 have recovered so far. West Bengal and Andhra Pradesh are now housing 3,332 and 2,709 cases, respectively. Death toll in West Bengal has reached 265, whereas 55 people have passed away due to the pandemic in Andhra Pradesh so far. The infection tally in Punjab now stands at 2029 , while the Death toll in the state at present is 39 , with no casualties reported in the past 24 hours. Cases recovered in the northern state stand at 1847.