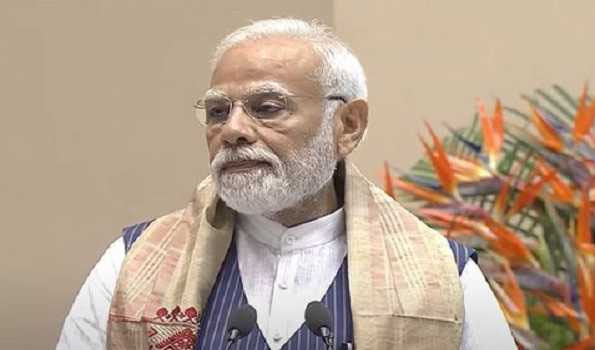 New Delhi, Nov 25 (UNI) India's history is about standing against tyranny with unprecedented valour and courage but such stories were deliberately suppressed, Prime Minister Narendra Modi said on Friday while adding that the same is being rectified under his government.

"Unfortunately, even after independence we were taught the same history which was written as a conspiracy during the period of slavery. After Independence, it was needed to change the agenda of foreigners who made us slaves, however, that was not done," Modi said.

He was addressing the closing ceremony of year-long celebrations of 400th birth anniversary of Lachit Borphukan, the famous General of the Royal Army of the Ahom Kingdom of Assam who defeated the Mughals and successfully halted their ever-expanding ambitions under Aurangzeb.


The PM said that the fact that this event is taking place in Delhi is a reflection of this change. India is not only celebrating its cultural diversity but also acknowledging the unsung heroes and heroines of its history, he said.

"We bow to the valorous Lachit Borphukan on his 400th birth anniversary. He played pivotal role in preserving the culture of Assam," Modi said.

The Prime Minister emphasised that when a nation knows its real past, only then it can learn from its experiences and treads the correct direction for its future.

"It is our responsibility that our sense of history is not confined to a few decades and centuries," he said.

The Prime Minister said that Lachit Borphukan's life inspires us to rise above self and to give the highest priority to the national interest.

"His life teaches us that instead of nepotism and dynasty, the country should be supreme. No person or relation is above nation," Modi said.

He also released the book - 'Lachit Borphukan - Assam's Hero who Halted the Mughals' on the occasion. The book narrates the heroic fight of Borphukan against the Mughals as one of the most inspiring military feats of resistance in the history of India.