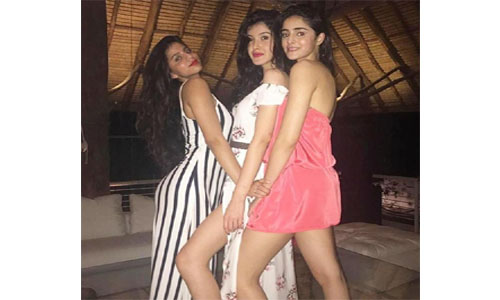 As they say friends are one,s biggest cheerleaders, many Bollywood stars often get praised by their close ones and it surely leaves fans in awe. Speaking of this, a trio of friends, Ananya Panday, Shanaya Kapoor and Suhana Khan always prove to be each other's biggest support and often root for each other on social media. Recently, Ananya Panday shared a bold photoshoot on her social media handle that left fans gawking. Seeing their best friend's stunning avatar, Suhana and Shanaya could not stop themselves and cheered for her.

Taking to her Instagram handle, Ananya had shared a series of stunning photos in a white top teamed up with brown underpants. Her hair and makeup were on point in the photos and she is seen posing while sitting on the floor. Seeing the photo, Suhana was left stunned. On the other hand, Shanaya also termed Ananya's photos as her favourite. Many other celebs took to the comment section to praise Ananya's chic yet stunning look in the pictures clicked by Rohan Shrestha.

Suhana wrote, -Oh My Godddd.- On the other hand, Shanaya, who was in awe of Ananya,s look, dropped a sweet comment on the photos. She wrote, Fav pics of u ever. Shanaya,s mom, Maheep Kapoor also was all hearts for Ananya.
Meanwhile, among the popular BFF squads in Bollywood, Suhana, Ananya and Shanaya,s name shines right at the top. Recently, Suhana jetted off to New York to resume her studies at NYU. She was dropped off at the airport by Shah Rukh Khan and AbRam Khan. Since Suhana and Shanaya made their Instagram account public, their photos with Ananya have been going viral on social media.