Sukhbir has lost sense of proportion after finding himself cornered in Baragari case: Punjab CM 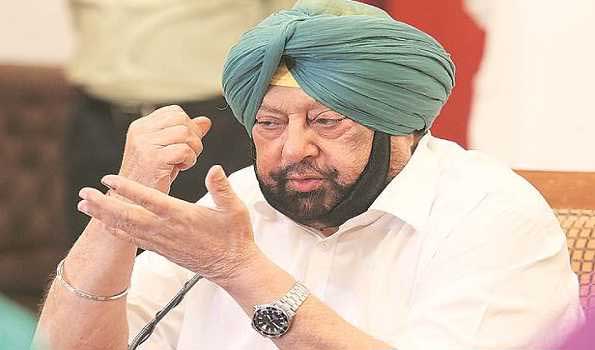 Chandigarh,Ridiculing the SAD Chief for his 'Atrocious Lies' that reflected his total frustration, Punjab Chief Minister Captain Amarinder Singh said that Sukhbir Singh Badal had clearly lost all sense of proportion in his desperation to get back into the political limelight.“The whole of Punjab knows what kind of a man the Shiromani Akali Dal (SAD) Chief is and the people of the state have categorically rejected him and his party- a humiliation that his inflated ego cannot swallow,” he said on Tuesday, adding that Sukhbir’s latest tirade against the congress government showed the deep sense of despair he was suffering from.

With his desperate attempts to deflect public attention from the Bargari and other sacrilege cases having fallen flat, Sukhbir was clearly grappling with the harsh reality that his crimes were now catching up with him, said Amarinder, adding that the bundle of lies he had come out with reflected Badal Junior’s worst fears. Sukhbir’s senseless and unfounded accusations against the Congress in the Bargari case, in particular, showed that he knew he and his party colleagues were well and truly cornered, and would not be able to escape the arm of justice for long, he added.“Has Sukhbir forgotten that it was he and his family who were at the helm of the government when religious scriptures were being burnt and torn in Punjab? Has he forgotten that he was the Home Minister of the state when innocent people were fired upon in Behbal Kalan and Kotkapura?” he asked.

Even if he wants to conveniently ignore these hard facts, the people of Punjab have neither forgotten nor forgiven him or his party for what happened under the nose of the SAD-BJP government, Amarinder said.Mr Amarinder said the fact that Sukhbir had chosen to unleash his viciously false propaganda against the government just a day after the latter had come out with its checklist of successes of the past three years showed the extent of the Akali leader’s insecurity. Sukhbir knows he and his party have no political existence or standing in the state now, he said, adding that while the SAD Chief had always been a master of deceit, he had now hit a new low in the face of imminent action in the sacrilege cases.

Taking on the SAD President over his criticism of the development and welfare programmes undertaken by his government in the past three years, the Chief Minister scorned Sukhbir for hiding behind outrageous lies after himself betraying and neglecting the people for 10 years.“Your government did not deliver on even 10 per cent of its promises in 10 years, while we have completely or partially fulfilled more than 75 per cent of our promises in just 3 years,” he quipped.He pointed out that he had personally given out figures and data to prove every claim and achievement of his government while the Akalis had failed to highlight even one major accomplishment of their decade-long rule.Mocking Sukhbir’s charge of an 'invisible government', he said a real government always functions behind the scenes and the difference is visible on the ground- something the Akalis would not know since the Badal family were the only thing visible during their tenure.