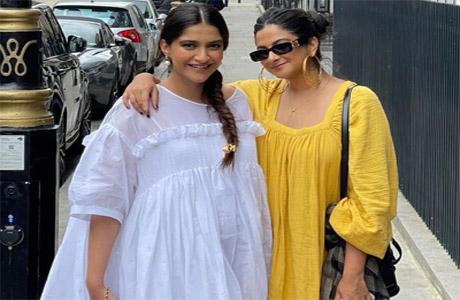 Bollywood actress Sonam Kapoor is soon going to be a mother. She is all set to embrace parenthood with her husband and businessman Anand Ahuja. Her pregnancy glow shines through every time she posts a video or photo on social media. Currently, the Veere Di Wedding actress is in London with her husband Anand Ahuja, and a few days back, her sister Rhea Kapoor and her husband Karan Boolani also joined them.
A few hours back, Sunita Kapoor shared an unseen picture of her daughters- Sonam and Rhea on her Instagram handle from their time in London. She captioned it: "Daughters are a blessing." adding several red heart emojis. Reacting to the photo, Sonam commented and wrote: "I miss you so much mama." Karan Boolani also dropped several heart emojis. In the photo, Sonam is seen flaunting her baby bump as she donned a white long maxi dress, Rhea, on the other hand, sported a yellow dress. The sibling duo was seen all smiles as they posed for the camera.
Earlier this year in March, Sonam and Anand had announced the good news via a social media post with a sweet post that read, "Four hands. To raise you the very best we can. Two hearts. That will beat in unison with yours, every step of the way One family. Who will shower you with love and support. We can’t wait to welcome you, the couple wrote." Sunita shared her excitement about being a Nani and re-posted Sonam's photos on her social media handle. She wrote, “Of all the names I have been called am going to love being called NANI the best Yayy! Can’t wait to to be a NANI !!!” Earlier this week, Sonam also had her baby shower in London.