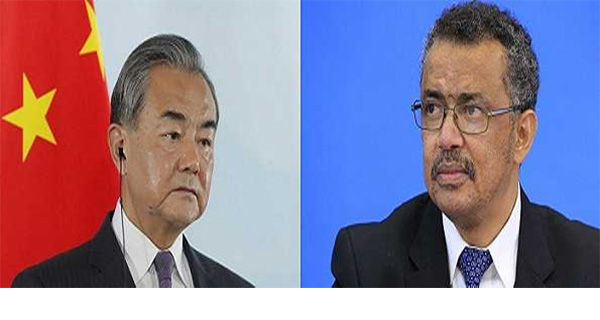 China Foreign Minister Wang Yi has emphasised the need to support the World Health Organization (WHO) in order to safeguard the principle of multilateralism, maintain international solidarity and secure the status of the United Nations.

Xinhua reported Yi conveying this message to the WHO Director-General Tedros Adhanom Ghebreyesus in a telephonic conversation on Saturday.

Yi told Dr Ghebreyesus that he had made the phone call to convey the firm support of the government and people of China to the WHO and expressed his hope that people across the world also have the same attitude.

Yi said that allegations that WHO failed to gauge the threat posed by the novel coronavirus and failed to handle the pandemic have no 'factual' basis and actions against the organisation do not enjoy popular support.

He also lauded Dr Ghebreyesus for being the first WHO director-general from a developing country noting that he had been elected through a huge margin.
US President Donald Trump had on April 14 announced his decision to halt funding of the WHO for "severely mismanaging" and "covering up the spread of the coronavirus".

Trump had emphasised that if the WHO had sent medical experts into China to objectively assess the situation on the ground and called out China’s lack of transparency the outbreak could have been contained at its source.

China does not enjoy a very good record as far press freedom is concerned as Reporters Without Borders in its 'World Press Freedom Index 2019' ranked China 177 of the 180 countries.