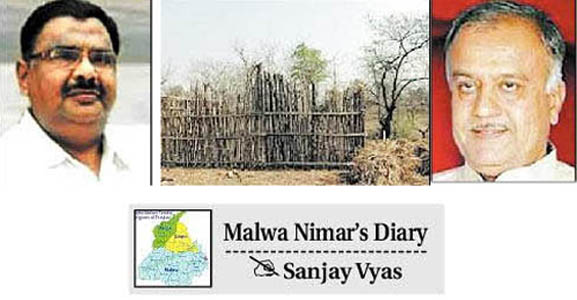 On the Chief Minister Shivraj Singh Chouhan’s strict stand against the encroachments, the administration destroyed the encroachment of even the incumbent minister Gopal Bhargava who belongs to the ruling government, while the Burhanpur administration is proving incompetent in front of the independent MLA there. The illegal construction of Kalim Qureshi, a supporter of Independent MLA Thakur Surendra Singh, has to be removed. In protest against this action, Surendra Singh is repeatedly challenging the administration.

Because of this the administration is unable to take action. Why Surendra Singh is overshadowing them is a matter of investigation. Not only this, the local administration is also hesitating to break the illegal market of the supporter of BJP MP as well as the illegal construction of the hospital situated in Shanwara belonging to the son of Congress leader.

Here the Burhanpur administration is hesitating to take action against the encroachment, whereas the Forest Department is seen acting promptly. Despite the deadly attack by the encroachers with arrows and sling on them during the operation in the Ghagharla forest of the Navara range in November last year, forest staff is ready to take action against the encroachments on the forest land with determination this time. The forest administration has made full preparations to chase away the outside encroachers who have occupied forest land in the greed of pattas. Recently, the police-administration had freed the Ghagharkund of Ghagharla and the forest of Devjhiri. Now, outside encroachers in Nimna, Borsal, Chandni, Badnapur and Seawal have been told to move out. Recently, after the action in Ghagharla, Collector Praveen Singh had told - Those encroachers who have settled here in the hope of lease should leave from here, otherwise action will be taken. Now the forest department has pasted notices in encroachment sites and villages. It is written that the encroachers should vacate the land within three days, otherwise action will be taken and their movable and immovable property will be attached.

Former BJP state president and Khandwa MP Nand Kumar Singh Chauhan remained active till the results of the by-elections in Nepanagar and Mandhata Vidhan Sabha with full caution during the peak period of Corona, but now he could not avoid getting infected in the New Year. His report has turned positive. Recently, State Government Minister Hardeep Singh Dung and Indore MP Shankar Lalwani attended a press conference with him during a program meorganized in Burhanpur. They are now undergoing their test.