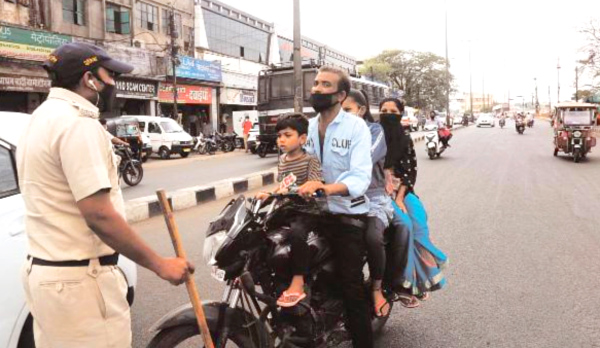 Chronicle Reporter, Bhopal,
The surge in Corona cases continues in Madhya Pradesh. In the last 24 hours, 13,107 new cases have been found. During this period, 75 patients have also succumbed to the virus. Chief Minister Shivraj Singh Chauhan has instructed all collectors to try to reduce the positivity rate. According to the latest report of the Health Department, the positivity rate of the state is 24%.

In the second wave of Corona, in the 20 days of April, 1 lakh 45 thousand 977 have been found infected. Whereas in the first wave, so many cases were received in 236 days. Similarly, 774 patients died in 20 days. It took 93 days to reach this figure of deaths in the first wave. It is clear that the speed of corona infection is not decreasing.

In Bhopal, the highest number of 1684 patients recovered in the second wave on Wednesday. At the same time, 1709 new cases were found. Thus the number of active cases has increased by only 25. There are 9057 active cases in the city.

The number of active cases in the state has exceeded 82 thousand. The government had estimated that by April 30, the number of active patients would be 1 lakh. But according to the rate at which the infection is spreading, it is estimated that by April 25, the active cases will be 1 lakh. In such a situation, it is a big challenge to provide treatment and health facilities. However 71% of the patients are undergoing treatment at home.

While the rate at which the infection is spreading in April, the number of people who defeated the corona in the state is also increasing. In the last 20 days, 82 thousand 271 patients have been healthy. If we compare the four big cities, then Bhopal has the highest number of people recovering. In 20 days, 16 thousand 636 patients defeated Corona in the state capital.

Expressing concern over the 30 percent positivity rate of Jabalpur, Chief Minister Chouhan has instructed to make every effort to control it. The arrangements for hospitals in Jabalpur, available beds, oxygen supply, status of essential medicines including Remdesivir were also reviewed.

Chief Minister Chouhan instructed the Tikamgarh Collector to ensure effective arrangements to isolate people coming from outside at the village level to prevent the spread of infection in the villages.

The highest number of 265 deaths took place in these 20 days in Gwalior. Jabalpur is at number two, where the figure of deaths is 168. While 153 deaths were recorded in Bhopal and 104 in Indore. However, the number of dead bodies cremated with the corona protocol at the crematorium is several times higher.