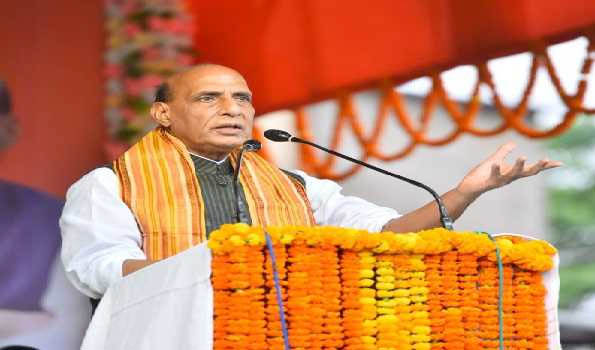 Karimpur/ Swarupnagar, Apr 13 (UNI) Union Defence Minister and senior Bharatiya Janata Party (BJP) leader Rajnath Singh on Tuesday alleged the ruling Trinamool Congress (TMC) government led by Mamata Banerjee is indulging in appeasement, polarisation politics to win the votes.
Addressing public meetings here, Mr singh said, the day BJP is voted to power, it will ensure that 'cut money' culture and 'Tolabazi' is immediately stopped.
He accused the TMC leaders of disrespecting Scheduled Castes, Scheduled Tribes and Other Backward Classes.
The union minister said Chief Minister Mamata Banerjee has agreed that TMC is on its way out and BJP is set to form government in West Bengal.Mr Singh said if his party is voted to power would ensure that political killings are stopped completely.
He accused the chief minister of talking 'nonsense about Prime Minister Narendra Modi' and said that after being banned by the Election Commission, the TMC supremo was now against the poll body.
"You talk nonsense about our PM. Why do you blame him for everything? I have also been a CM, I know how a CM should behave...EC has banned her for 24 hours citing MCC violation. She's now against the EC. Didi, can you spare anyone?" the BJP leader said.
The union defence minister said, "I saw on TV that there's a bomb factory here. I thought it was a govt factory, but bombs were made to attack opponents. How was it possible to make bombs under CM's leadership? If BJP government is formed, there will be either bombs o