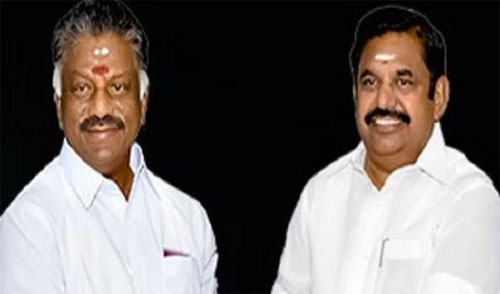 Chennai, Mar 6 (UNI) The ruling AIADMK inked the seat sharing agreement with its ally, the BJP, for the April six Assembly elections allotting 20 seats and the Kanniyakumari Lok Sabha seat.
An agreement to this effect was signed between the two parties late on Friday night.In a joint statement, Chief Minister Edappadi K Palaniswami  and Deputy CM O Panneerselvam, who were also the coordinator and co-coordinators of the AIADMK, said the BJP was allotted 20 Assembly seats and the Kanniyakumari Lok Sabha seat, where bypoll was necessitated following the death of sitting Congress MP H Vasanthakumar due to coronavirus.
They also said the AIADMK would support the BJP in Kanniyakumari.With this, the AIADMK, which is looking for a hat trick of wins,
having won in 2011 and 2016, has finalised seat sharing pact with  two of its allies.
Earlier, it allotted 23 seats to the PMK, while hectic parleys  were on with other allies, the DMDK, Tamil Maanila Congress led by former Shipping Minister G K Vasan and other minor parties  like the IJK and Puthiya Tamizhagam.The DMDK, which had faced the last Assembly elections as part
of the People's Welfare Front and drew a blank, had been making  a hard bargaining of at least 25 seats, besides a Rajya Sabha
seat.
Sources said, the AIADMK has accepted its offer to allot a RajyaSabha seat, but was not inclined to the demand of 25 Assembly
seats.DMDK Vice-President Parthasarathy said 'we have asked for 25 seatsand will not settle for anything less than that, though AIADMK has agreed for the RS seat. It's for the AIADMK to take a call on the  continuance of the alliance'.