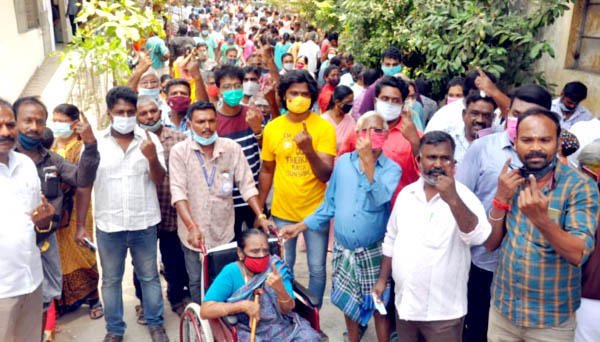 New Delhi, Apr 6 (UNI) Tamil Nadu, Kerala and Puducherry, which went for single-phase Assembly polls on Tuesday, recorded nearly 65, 70 and 78 per cent voting till 1800 hrs, according to Election Commission of India.

West Bengal, which went for the third phase of eight phase polling on Tuesday, saw 78 per cent voting while Assam recorded 79 pc voter turnout till 1800 hrs in the third and final phase of polling.

Bengal had recorded more than 80 pc polling in the earlier two phases, while voter turnout in Assam was almost the same as the previous phases.

The polling was conducted on Tuesday at a total of 475 Assembly constituencies, comprising 234 in Tamil Nadu, 140 in Kerala, 30 in Puducherry, 31 in West Bengal and 40 in Assam.

The voting was almost peaceful with stray incidents of violence in Tamil Nadu, Kerala and West Bengal.

In Tamil Nadu, Thondamuthur DMK candidate Karthikeya Sivasenapathy's car was damaged near Gandhipark in Coimbatore when he attempted to visit a polling booth.

In Kattayikonam of Kazhakootam segment of Kerala, four BJP workers were attacked by a group of people in connection with alleged bogus voting.

Kazhakootam BJP candidate Sobha Surendran alleged that the attackers were from CPI (M) and staged a sit-in dharna in front of a polling booth seeking action.

At Nedumkandam in Idukki District bordering Tamil Nadu, a group of people was blocked by Congress and BJP workers alleging that they crossed the border to reach here to cast bogus votes in favor of CPI(M).

A 14-member group, including women, reached in a vehicle carrying cotton and liquid to clean the indelible ink.

A similar incident was also reported at Kambammettu in the Idukki district.

At Anthoor in Kannur district, UDF candidate V P Abdul Rashid was attacked allegedly by CPI(M) workers when he questioned the partisan manner of the polling official who was not following steps to identify the voters by removing their masks.

UDF candidate Dharmajan Bolgatty alleged that he was attacked by DYFI activists when he reached Balussery to cast his vote at a polling station there.

In Bengal, a BJP supporter was arrested for allegedly assaulting a TMC candidate at Khanakul seat in the Hooghly when he arrived at a booth after hearing that the voters were not allowed to move near the polling booth.

A clash broke out between TMC and BJP workers in the Arambagh constituency of Hooghly district over alleged voter suppression in the region.

Clashes broke out between police and the BJP workers at Dubrajpur in Birbhum district, over the death of a party worker.

The police used teargas and lathi-charge to disperse the crowd, resulting in injuries to many protestors and policemen.

A BJP supporter was arrested for allegedly assaulting a TMC candidate at Khanakul seat in the Hooghly when he arrived at a booth after hearing the voters were not allowed to move near the polling booth.

TMC candidates Sujata Mondal and Nirmal Majhi alleged that they were heckled and assaulted by BJP workers, a charge denied by the saffron camp.

An estimated 65 per cent of the 6.29 crore electorate in Tamil Nadu cast their ballots till 1800 hrs in one of the most fiercely contested Assembly elections.

The ruling AIADMK filed a complaint to the Chief Electoral Officer demanding disqualification of DMK president M K Stalin's son Udhayanidhi Stalin for 'violating the poll code' by wearing a shirt with the DMK's poll symbol 'Rising Sun' and the party flag in his shirt while casting his ballot during polling.

A senior citizen collapsed and died, while five voters were injured when a concrete sunshade of a polling booth collapsed and fell on them in separate incidents.

As per a report, Thondamuthur DMK candidate Karthikeya Sivasenapathy's car was damaged near Gandhipark in Coimbatore when he attempted to visit a polling booth.

While Chief Minister Palaniswami cast his vote at a polling booth in his native village Siluvampalayam near Edappadi town in Salem district, DMK president MK Stalin voted in SIET College in Chennai.

Kerala, where polling in 140 Assembly seats was held in a single phase, recorded 70 nearly per cent turnout till 1800 hrs.

The ruling LDF was quick to react and its Minister for the Welfare of Backward and Scheduled Communities AK Balan complained to the Election Commission against the NSS general secretary Mr Nair and Leader of the Opposition Ramesh Chennithala for their alleged attempts to describe the election as a 'fight between the faithful and non-believers'.

Kerala Chief Minister and CPI (M) leader Pinarayi Vijayan cast his vote at Pinarayi. Among the early voters was 'Metroman' E Sreedharan, contesting as the BJP-NDA candidate from the Palakkad constituency.

In West Bengal, polling in 31 Assembly seats was conducted in the third phase of elections, with nearly 80 pc polling. The BJP is seeking victory against the TMC, and the Left Front-ISF-Congress alliance hoping to make a mark.

The Election Commission has described as sensitive all the 31 West Bengal assembly constituencies where prohibitory orders have been imposed under Section 144 of the CrPC in them.

Assam recorded 79 per cent polling till 1800 hrs for the 40 assembly seats in the last phase of polls in the state.

Peaceful voting was conducted in all the polling stations with no reports of violence being reported from many districts of the state.

However, there were reports of EVM malfunctioning in few polling stations.

The 40 assembly segments spread over the 12 districts in Lower Assam, including three in the Bodoland Territorial Region (BTR).

The fate of many politicians including BJP's star campaigner Himanta Biswa Sarma who is contesting from Jalukbari will get sealed in the ballot box.

The Union Territory of Puducherry recorded 78 per cent polling in 30 seats.

The Union Territory is witnessing a fight between the Congress-led alliance comprising DMK, Left parties and VCK and the NDA consisting of the AINRC, BJP, AIADMK and PMK.

The former chief minister of Puducherry and founder-leader of All India NR Congress N Rangasamy, who is contesting from Thattanchavady and Yanam constituencies, cast his vote at the Government Middle School, Thilaspet in Thattanchavady constituency.

BJP president in Puducherry and party candidate V Saminathan cast his vote at the Primary Government School Petichepet in Lawspet.

The counting of votes will take place on May 2.