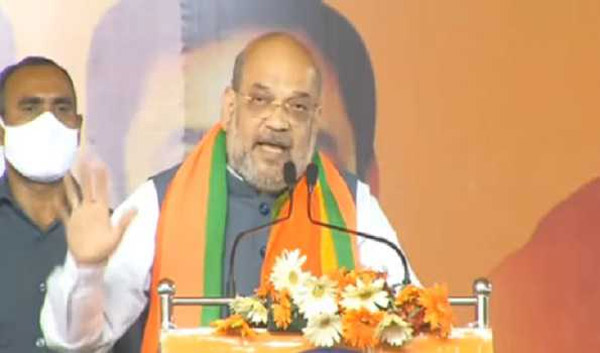 Chennai/Tirunelveli, Apr 3 (UNI) Launching a blistering attack on the Opposition DMK and its ally, the Congress, Union Home Minister Amit Shah on Saturday said Tamil Nadu's development is possible only if the dynastic and corrupt DMK-Congress allianceis eliminated in the April six Assembly polls.
Talking to media after a road show in the Thousand Lights constituency in the city to canvass votes for BJP candidate and actress Khushbu Sundar and later addressing an election rally in the southern Tirunelveli district, Mr Amit Shah said the BJP-led NDA has the vision to propel the state on the path of prosperity and faster development while preserving its great cultural and traditional ethos.
'Whatever development has happened under Prime Minister Narendra Modi’s regime across the country, should come toTamil Nadu also so that the dreams of AIADMK icons and late Chief Ministers MGR and J Jayalalithaa could come to fruition',he said.
“Only the BJP and AIADMK governments can safeguard fishermen, women, unemployed youth and people who believe in culture and
tradition,” he said.
Effusively praising Chief Minister Edappadi K Palaniswami and Deputy Chief Minister O Panneerselvam for taking Tamil Nadu on the path of development, Mr Shah said they had worked efficiently to prevent the spread of COVID-19 in the State.
He also appealed to the voters to bring in a double engine growth to Tamil Nadu by voting for the BJP-AIADMK alliance  and ensure a massive majority for the alliance.