TN has to be run from TN, not from Delhi : Rahul 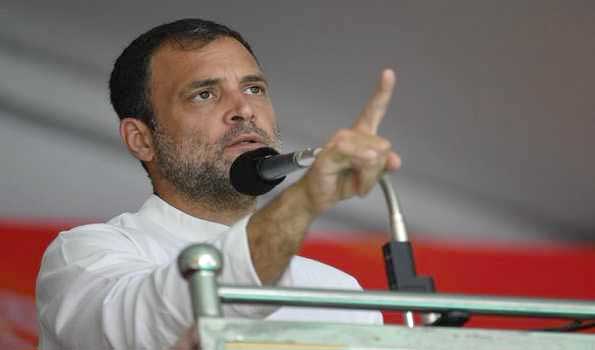 Chennai, Mar 28 (UNI) Former Congress President Rahul Gandhi on Sunday slammed the BJP and the RSS and said Tamil Nadu has to be run from Tamil Nadu and not from Delhi.
Addressing a n election meeting in the city to canvass votes for the candidates of the DMK-Congress combine, he asserted that the Congress and the DMK will never compromise on the ideologies that were against the interests of Tamils and Tamil nadu.
In a scathing attack on the BJP, Rahul said 'but one party is out to destroy that inherent strengths of TN and this election is to defeat
them'.'In Congress we believe in mutual respect, love and affection when it comes to party functionaries and alliance party leaders.
But in BJP one has to touch the feet or bend before Prime Minister Narendra Modi and Union Home Minister Amit Shah', he said.
'It pains me to see CM of TN, which has a great culture and  history,bowing down before Mr Modi and Mr Shah', he alleged.
'Upright people will not bow down before others. The TN CM is  forced to do so because he is corrupt. That is why the Congress
is supporting the DMK and I am here to support the DMK-Congress  alliance', Rahul said.
Alleging that there was a full-scale assault on the ideology of Tamil Nadu, he said this assault should not be underestimated.
'It is conceptualised by the RSS and Narendra Modi. they want  a Tamil Nadu which bows in front of them. They do not understand
the Tamil Nadu," he said, adding, "India cannot exist without Tamil Nadu".
He said the BJP and the RSS would be smashed in this election.
He said this election is different from the earlier elections, which were fought between political parties. This is a Tamil election, with
the AIADMK, BJP and RSS on the one side and the people of Tamil Nadu on the other side.
Noting that TN has knowledgeable youth and is the HR capital  of India, Rahul said anyone who drives a car will definitely know
that it was manufactured in Sriperumbudur near here.
'But one party is out to destroy that inherent strengths of TN and this election is to defeat them, he added.
'We want Tamil Nadu to be ruled by Tamils and from here and not from Delhi', Rahul said. Observing that Tamil Nadu's politics requires transformation,he said the State was going through big challenges. A dynamic state with the most intelligent youth could not give jobs to its children.
The economy is in a disastrous situation. Tamil Nadu needs a new imagination, a new way of doing things, he said and exuded confidence that the DMK-Congress government which comes will be such a government thatis going to respect the people of
Tamil Nadu.
It will be a government that will not be controlled by Delhi and DMK President M K Stalin will become the Chief Minister after the polls.