Taapsee Pannu shares some glimpses of her look from sports drama Shabaash Mithu! 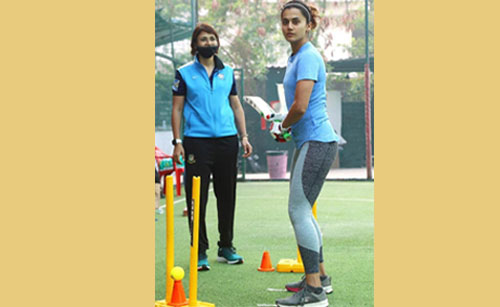 Taaapsee Pannu is simultaneously shooting for Looop Lapeta and practicing for Shabaash Mithu. Recently, the actress shared a romantic snap with her Looop Lapeta co-star Tahir Raj Bhasin and penned a beautiful note for their characters Satya and Savi and denoted them as Fire and Ice. Now, Taapsee has shared some glimpses from her upcoming sports drama Shabaash Mithu.
Taapsee Pannu dropped a few pictures from her cricket practice session on the Instagram story. In the pictures, she can be seen donning the cricketer avatar. While sharing the pictures, the actress captioned the stories, ''Get set GO''.
Rahul Dholakia's sports drama Shabaash Mithu is backed by Viacom18 Studios and starred Taapsee in the titular role. More about Mithali Raj, she is the former captain of the Indian women’s national cricket team in Tests and ODIs. She is the highest run-scorer in women’s international cricket and the only female cricketer to surpass the 6,000 run mark in WODIs.
More on Taapsee Pannu's work front, she will be seen in Vinil Mathew's mystery thriller film Haseen Dillruba which is produced by Aanand L. Rai and Himanshu Sharma under the banner Colour Yellow Productions. The film stars Taapsee Pannu, Vikrant Massey, and Harshvardhan Rane. The actress will also be seen in Aakash Bhatia's 'Looop Lapeta' opposite Tahir Raj Bhasin. She has also wrapped up the sports drama Rashmi Rocket.