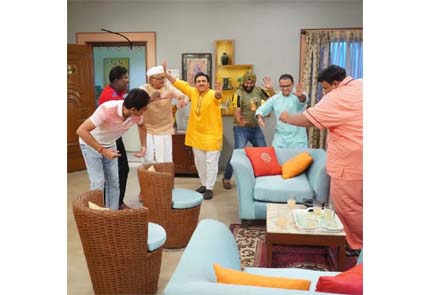 The longest-running sitcom Taarak Mehta Ka Ooltah Chashmah is keeping the audience entertained. The show has recently completed 13 years and all actors thanked viewers for their love and support. In the current track, we will see that the Purush Mandal will pay tribute to legendary late actor Dilip Kumar. And Jethalal (played by Dilip Joshi) will also enact an iconic scene from the famous film Mughal-e-Azam.
Taarak Mehta writes an article on the iconic actor which receives very much appreciated. Purush Mandal has gathered at Taarak Mehta's house and after reading through the article and praises him for the great piece he has penned. They also took a trip down a memory lane and recalled memorable moments of Dilip Saab’s cinematic journey. At Champakklal’s request, Jethaalal also enacts an iconic scene from Mughal-e-Azam which receives applause from everyone present in the house. The evening concludes on a melodious note with everyone singing a few of Dilip Kumar’s most memorable songs.
Recently, Bhide had asked everyone to meet at the reception of the resort for the final checkout. To make sure that everyone has heard him, he repeats the whole schedule once again. But Jethalal was not able to wake up early and was late. As he wakes up, he realized that he is late. This late coming behaviour of Jethalal made Bhide very angry at him. Both get into a heated argument. To note, the show is loved by all genres. It is one of most-watched television serials.