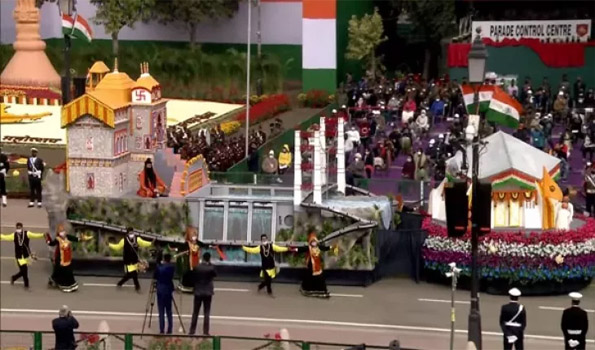 New Delhi Jan 26 (UNI) Alongside India's military might showcased on Rajpath on the 73rd Republic Day on Wednesday, there were 12 tableaux from various states and union territories, representing the history and cultural diversity of the country. The themes of the tableaus were prepared keeping in mind the 75th Independence anniversary in line with the 'Azadi ka Amrit Mahotsav'. This year's Republic Day celebrations have been curtailed due to the coronavirus pandemic, but that has not fazed the spirits of anyone, as a grand flypast with unseen views at sky heights enthralled the audiences glued to their television sets. Uttarakhand's state tableau was based on the theme 'Pragati Ki Or Badhta Uttrakhand'. It is also inspired by the progressive development and projects in the area of connectivity and religious sites. In the front it showcased the Hemkund Sahib Gurudwara and at the rear it depicted the Badrinath Temple. The theme for Arunachal Pradesh was based on 'Anglo Abor Adiverse'. The tableau highlighted the resistance of indigenous people of the state particularly of the Siang region formerly known as Arbors by the British who bravely fought against their imperial policy of expansion in India. The southern state of Karnataka showcased the theme of 'Credo of Traditional Handicrafts'. The tableau also depicted Mysore Rosewood ivory Inlay, the eye-catching Bidriware, Kinhala craft, Bronze Statue, and Lacquer ware toys from Channapatna. Jammu and Kashmir's tableau highlighted the changing face of the Union Territory in the developmental scenario. It depicted the recently constructed Banihal Qazigund highway tunnel which has been thrown open to the traffic. Also on display was the Mata Vaishno Devi Bhawan located in Katra in the Trikuta Mountains of Jammu Division. Chhattisgarh highlighted its 'Godhan Nayay Yojna' and also portrayed the various ways in which the scheme addresses multiple global concerns at once by synergizing traditional knowledge and scientific approach to the use of rural resources. The observer of the Tableau depicted rural women in traditional tribal costumes collecting cow dung and taking them to a collection centre in Gauthans for sale. Tableau from Maharashtra showcased the biodiversity of the state, displaying 15 animals and 22 plants, including the Blue Mormon butterfly, the 'state butterfly', and Indian Giant Squirrel, the state animal. Punjab depicted the contribution of the state in the freedom struggle. The tableau displayed huge statues of freedom fighters Bhagat Singh, Rajguru, and Sukhdev. Besides depicting protests against Simon Commission by Lala Lajpat Rai, and Shaheed Udham Singh. The Uttar Pradesh tableau depicted the Kashi Vishwanath Dham and the recently developed corridor. A cultural performance by 480 dancers chosen through an all-India dance competition 'Vande Bharatam Nritya Utsav left eveyone spell-bound.