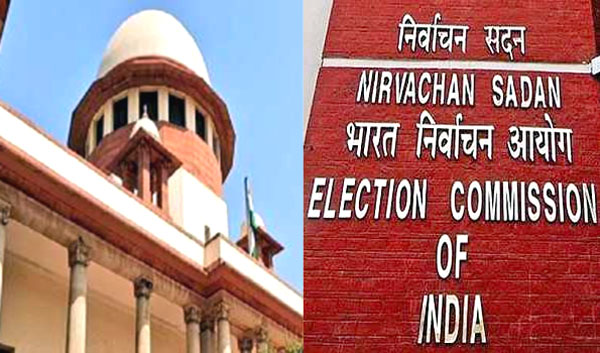 New Delhi, May 3 (UNI) The Supreme Court on Monday told the Election Commission of India (ECI) to take in right spirit as a bitter pill the observation of the Madras High Court that the poll body was singularly responsible for the Covid-19 surge and it should probably be booked for murder for failing to maintain coronavirus protocols during election campaigns.

The Top Court was hearing plea of the ECI challenging the observations made by the Madras High Court, which the poll body said were 'uncalled for, blatant and disparaging"

A bench of Justices D Y Chandrachud and M R Shah said, 'Sometimes observations are made in larger public interest and you should accept it in right spirit as a bitter pill.'

The Court does not want to "demoralise" high courts as they are vital pillars of democracy, Live Law quoted Justice Chandrachud as saying.

The bench also said that the prayer of the ECI to stop media from reporting oral observations made by judges was "far-fetched".

Senior Advocate Rakesh Dwivedi, appearing for the ECI, submitted before the bench that such harsh remarks should not be made against a constitutional body.

Justice Shah further pointed out that, following the sharp remarks of the Madras High Court, the ECI took steps to ensure that the COVID protocol was observed during the counting day.

'Your subsequent decisions after the remarks have improved the system,' the bench added.

The Court reserved the order on the ECI's plea and it is likely to be pronounced on Thursday.