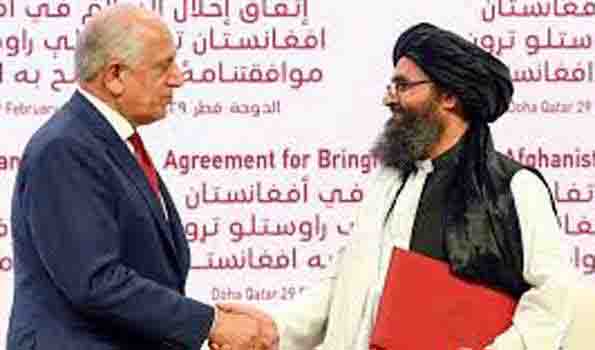 Kabul, A blast in eastern Afghanistan's Khost on Monday, which killed three and injured eleven, signaled the end of a period of relative calm in Afghanistan as the Taliban ordered its fighters to resume operations against the Afghan forces just two days after signing a deal with Washington aimed at ushering in the long elusive peace in the country. Although no group immediately claimed responsibility for the attack, the blast occurred around the same time as the Taliban ordered its fighters to recommence attacks against the Afghan army and police forces, apparently ending an official “reduction in violence” that had seen a dramatic drop in bloodshed. The partial truce between the US, the Taliban and Afghan forces lasted for the week running up to the signing of the US-Taliban accord in Doha on Saturday, and was extended over the weekend. “The reduction in violence... has ended now and our operations will continue as normal,” Taliban spokesman Zabihullah Mujahid said. He further added that “As per the (US-Taliban) agreement, our Mujahideen will not attack foreign forces but our operations will continue against the forces of Kabul government.” Soon after this statement, the Taliban began attacking army positions in the northwest province of Badghis in which one soldier was killed according to a report by Dawn. President Ashraf Ghani said on Sunday he would continue the partial truce at least until talks between Afghan officials and the Taliban kick off on March 10 in Oslo, though he rejected the clause for prisoner swap with the Taliban, which is one of the major demands of the Taliban. The Doha deal includes a commitment to swap 5,000 Taliban prisoners held by the Afghan government in return for 1,000 captives, but Ghani said the US had no authority to negotiate such an exchange. “Ghani’s stand shows that the Americans didn't do the groundwork before signing the agreement,” a Taliban source in Pakistan said. Earlier, a Taliban spokesman ruled out intra-Afghan talks until prisoners were freed by the Afghan government. Under the deal, foreign forces will leave Afghanistan within 14 months, subject to Taliban security guarantees and a pledge by the insurgents to hold talks with Kabul.However, many Afghans fear the deal is nothing short of abject surrender by the US which will ultimately see the Taliban storm back to power in the country with an Islamic system of government which the Taliban has vowed to restore in Afghanistan.Ever since the Taliban and the US signed the peace deal, the former has been claiming 'victory' over the latter in the nearly two decade long war.“The reduction in violence was a confidence builder. We’re very serious about our obligations and we expect the Taliban will be serious about their obligations,” US Forces-Afghanistan commander Gen Scott Miller said late on Monday.