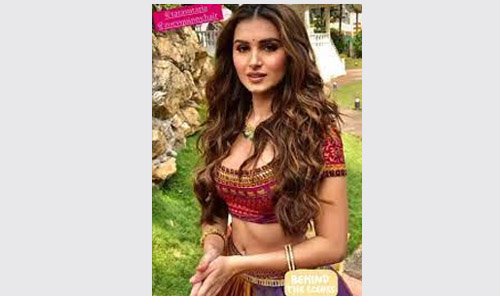 Among the gorgeous beauties of Bollywood, Tara Sutaria always manages to make heads turn with her style and grace. Be it slaying in a casual look or opting for a couture gown for a red carpet event, Tara manages to ace it all and fans love every bit of her style. Often, she shares a sneak peek of her looks on her Instagram handle and interacts with her fans via the same. Once again, as Tara gave all a glimpse of her fun traditional photoshoot, she left them gushing over her look.
Taking to her Instagram story, Tara shared a photo in which we can see her stun in a gorgeous ethnic outfit. In the photo, Tara is seen clad in a hot pink blouse with a purple skirt. With it, she is seen opting for a matching necklace, bangles and earrings. Her hair is styled perfectly with soft curls in them falling on the sides of her face. She added a red bindi to her forehead to complete the gorgeous ethnic look.
The gorgeous star has been in the headlines over the past few weeks since the first look from her upcoming film Tadap with Ahan Shetty was revealed in the first week of March.
Meanwhile, the film, Tadap has been helmed by Milan Luthria, and produced by Sajid Nadiadwala. The film is a Hindi remake of Telugu film, RX 100 and slated to release on September 24, 2021. Besides this, Tara also has Ek Villain Returns with John Abraham, Arjun Kapoor and Disha Patani. It is helmed by Mohit Suri and produced by Ekta Kapoor, Bhushan Kumar. It is slated to release on February 11, 2022.