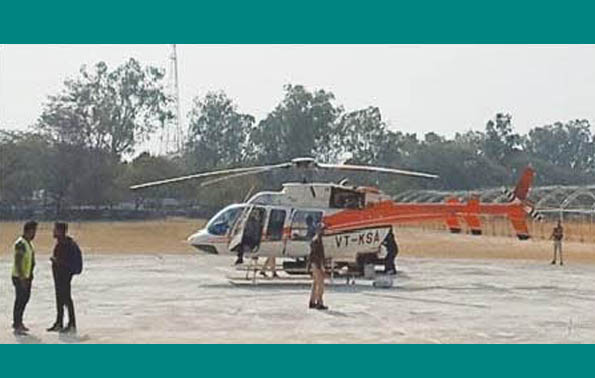 Chronicle Reporter, Betul
Republic Day is near, just before that rehearsal is also going on in the police ground. Meanwhile, suddenly a helicopter landed directly at the police ground at 12 noon on Sunday, causing a sudden panic.
People thought that a VIP had come, but after a long investigation, the situation became clear that for the aerial survey of the freight corridor being constructed from Delhi to Hyderabad, the officials of the private agency had come to Betul for inspection. The officials had also taken due permission from the police department to land the helicopter. The team returned after staying in Betul for about one and a half hours, but during this time about a dozen policemen of the police department were deployed for the protection of the helicopter for security reasons. Sources reveal that a 975 kilometer freight corridor is to be built between Delhi and Hyderabad. For this, the work of satellite survey has already been completed. Now the aerial survey has been started by the agency for the corridor connecting north to south. In view of this, the consultancy company of Vijayawada had come to Betul from Vijayawada to conduct an aerial survey of the freight corridor. Although the officials of the Railway Department of Betul were not aware of the arrival of the top officers of the survey team, they also do not know the reality.
Freight corridor will give a boost to trade
Sources say that a radius of about 975 km is coming out in the freight corridor connecting north to south. Dozens of major stations will be included in this and since after the construction of the freight corridor, the hassle of stopping goods trains at different places will end. Due to this the business will grow rapidly. Survey work is going on by the Railways especially for laying the fourth line for the corridor. The freight train will start smoothly after the fourth line is laid.
It has been reported that the aerial survey team for the freight corridor has reached Betul. There was news of the officials of the survey agency coming to Betul.
- Ashok Katare, Traffic Inspector, Central Railway Betul