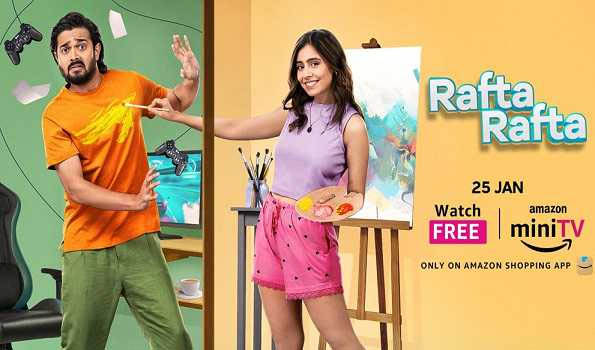 The teaser gives a peek into the lives of a newly-married couple, Karan and Nithya and the nuances of a young marriage. In the recently released quirky teaser, the couple is seen enjoying each other’s company over breakfast which immediately leads to a comedy of errors, set to take audiences on an endearing journey of the characters, Karan and Nithya.

This silly fight gives us a glimpse into the lives of Karan and Nithya. While Nithya has high hopes of going on a holiday with Karan to spend some quality time, he ends up letting her down with his terrible jokes and forgetful behavior. He even tries to make it up to her, but that too doesn’t go as expected, either!

The seven-episode series promises an engaging, quirky, and fun experience navigating through the everyday problems of a married couple. With them, things almost never go as planned, and sometimes they just take funny turns to go the right way!

Content creator turned actor Bhuvan said, “I have grown up in a middle-class family and the way marriage is perceived has changed drastically over the years, certainly because of many factors, known and unknown. While there is enough content available that narrates a romantic drama, we have tried to capture the nitty-gritty of a modern marriage in Rafta Rafta, with an unexpected twist! We are super delighted that Amazon miniTV is our streaming partner, as our content will be accessible to viewers pan-India for free.”

“When I found out that I’ll be working alongside Bhuvan in the show, I was immediately convinced. I’ve always rooted for him as a content creator and now, as an actor. A close second reason that convinced me instantly was the quirky narrative that brings a fresh perspective of a married couple on screen. I am sure that the audience will enjoy watching Rafta Rafta, abhi toh bas teaser out hai, series abhi baki hai mere doston,” added Srishti.

‘Rafta Rafta’ is a romedy with a twist that is creating waves of intrigue with its rib-tickling teaser. It will release on January 25.