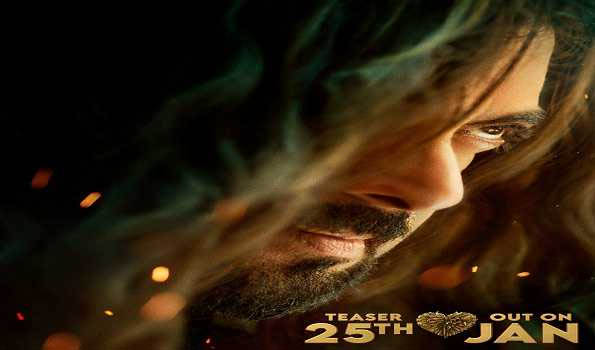 New Delhi, Jan 23 (UNI) With the rumour mills churning and Salman Khan's latest cinematic offering having been the talk of the town for the past several months, the adulating fans of ‘Bhaijaan’ are in for a big pre-Eid treat towards the last week of this month.

The makers of Salman’s latest cinematic venture, 'Kisi Ka Bhai Kisi Ki Jaan', are all set to treat the eagerly awaiting audiences with the teaser of the latest Bhai-flick.

The makers of the film will release the teaser alongside Shahrukh Khan’s ‘Pathaan’ in theatres all across the country on January 25, and will later be available on YouTube and other digital platforms.

The makers have planned a unique approach for the unit launch which is "theatres first", the motion units will be first launched on big screens in the theatres followed by digital.

Sharing a still from the movie on Monday, Salman tweeted about the teaser release of ‘Kisi Ka Bhai Kisi Ki Jaan’ with ‘Pathaan’ shows, thus giving his fans, and the audiences in general, an early start to the celebrations.

The film is slated to release on Eid 2023, and will be a Zee Studios worldwide release.