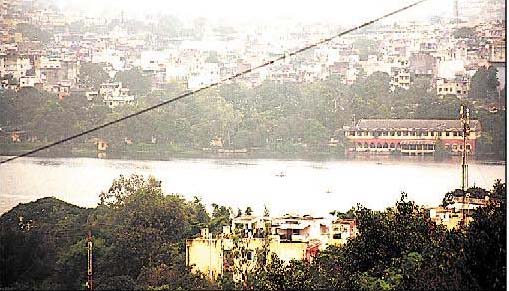 Chronicle Reporter, Bhopal
With the weakening of monsoonal systems, the state has received relief from heavy downpours. In Bhopal, the weather turned sultry and humid as the Sun shone after many days and the temperature rose.
Due to the active system in Rajasthan-Bihar, rainfall is being recorded in Rewa, Satna, Sidhi, Singrauli, Shahdol, Balaghat, Sheopur and Shivpuri of Vindhya region of MP. The Meteorological Department has predicted heavy rains at isolated places in these districts in the next 24 hours. There can be up to 2.5 to 4.5 inches of rain here. Monsoon has been active in these districts in the last 24 hours. The highest rainfall has been recorded in Sidhi. However, there is sunshine in other districts including Bhopal, Indore. There is no possibility of heavy rain in these districts for the next 3 to 4 days. However, due to the local system, light rainfall may occur.

Chance of lightning with thunder
There is a possibility of thunder and lightning in Gwalior, Chambal, Sagar, Rewa and Shahdol divisions. Weather will remain clear in the rest of the districts. According to meteorologists, due to the shift of monsoon from north-east Madhya Pradesh to eastern UP, it is raining in Rewa division. The rest of the districts do not have a strong system yet.
According to the Meteorological Department, Sidhi district received maximum rainfall in the last 24 hours. Two and a half inches of rain was recorded here. Rewa, Guna and Satna received less than 1 inch of rain. At the same time, light rainfall occurred in Bhopal, Raisen, Narsinghpur, Chhindwara, Hoshangabad, Umaria, Jabalpur, Damoh, Mandla, Sagar and Ratlam districts.
Axis of the monsoon trough is now running close to the foothills of the Himalayas. A cyclonic circulation is over Bihar and adjoining parts of East Uttar Pradesh.
During the last 24 hours, light to moderate rain with a few heavy spells occurred over parts of northeast Madhya Pradesh, while scattered light to moderate rain occurred over the rest of Madhya Pradesh.
During the next 24 hours, light to moderate rain with few heavy spells are possible over parts of Northeast Madhya Pradesh. Light to moderate rain may occur over remaining parts of Madhya Pradesh.