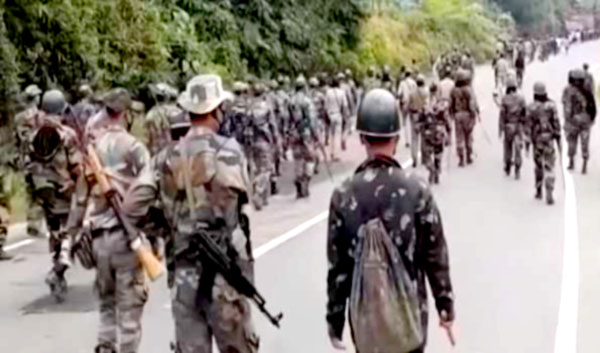 Agartala, Nov 22 (UNI) Death toll rose to two in scuffle between police and the activists of anti-Bru settlement agitation of Joint Movement Committee (JMC) of Mizos and Bangalees at Panisagar on NH - 8 in North Tripura on Saturday and left at least 32 people including 18 civilians, eight fire service crews and six policemen injured.

A 40 –yrs old fireman identified as Biswajit Debbarma was thrashed by the protestors suspecting him as a policeman, as he was going to join duty with Khaki dress. Debbarma was beaten indiscriminately with sticks by a group on the road and they left afterwards thinking him dead. In the hospital he was declared dead.

Tripura government has ordered a magistrate level enquiry into the incident while announcing compensation of Rs 5 lakh to each of the deceased families and provide free treatment to the injured persons. The district administration has clamped 144 of CrPC in Panisagar and Kanchanpur until further order and Social Welfare Minister Shantana Chakma and Deputy Speaker Biswabandhu Sen sit with JMC leader today to settle the dispute.

Chief Minister Biplab Kumar Deb and Deputy Chief Minister Jishnu Dev Varma have cancelled their scheduled Delhi visit tomorrow following communal unrest flared up in North Tripura. They are scheduled to meet with JMC leaders over their demand to cancel the state government’s initiative to rehabilitate over 6000 displaced Brus of Mizoram in Kanchanpur.

Police said the protestor Srikanta Das (46), a carpenter of Dasda area was shot dead in firing when a personal security guard of SDPO Panisagar had opened fire in self-defence.

According to report, the protestors had broken three barricades on the national highway to reach the spot for demonstration. Finally, due to police resistance a large number of demonstrators stepped back.

“When last three vehicles of students and youths were pushed back, SDPO Panisagar was chasing them from the back. After some distance SDPO was left with only a few policemen and taking the advantage, protesters attacked him.

One of security man was injured and his arm was reportedly taken by a civilian. Finding no other way, another guard opened fire on air and a total 14 rounds were used from his service weapon even after 9 or 10 rounds in the air; it couldn’t work in the mob. The last 4-5 rounds he used at below knee level on mob,” said a senior police official here.

The targeted bullets had hit three civilians – two on legs and at Srikanta’s chest, which caused his death on the spot. After Srikanta collapsed his other companions ran away and SDPO and his team could somehow manage to escape the spot, he said adding, “Later, they found Biswajit – a fireman in uniform and lynched him on the spot. But he was rescued after a long time by police.”

The incident widened the communal divide and fresh tension escalated in mixed populated areas of the state. While tribal based parties like IPFT, INPT and others directly accused non-tribals for yesterday’s incident, Amra Bangalee and Bangali Samaj have accused tribal parties and some individuals including royal scion Pradyot Kishore Debbarman for creating the situation for which JMC has to launch movement.

The JMC leader Anup Nath alleged that nowhere in the country such a large number of people from one state get rehabilitation in another state. But the Tripura government has fallen prey to the conspiracy of Pradyot like people and Chief Minister Biplab Kumar Deb succumbed to the pressure of the central government to agree with giving a settlement of 34000 Brus in Tripura.

“We have been suffering from continuous torture of Brus for last 23 years. Not only Bangalee families, the local tribals and Mizos are also suffering from atrocities of displace Brus. Even then we agreed to the proposal of the state government to accept the settlement of maximum 500 families but now they decided to host 6000 families in Kanchanpur, which will disturb the demographic character and create a permanent communal problem for us,” Nath stated.

The CPI(M) leader and former MP Jitendra Chowdhury alleged that for six days of agitation none of the ministers visited the agitators rather ignored their sentiment. When they wanted to demonstrate on national highway police was mobilised to prevent them, which has got hostile situations.

Tripura Congress Chief Pijush Kanti Biswas demanded inquiry into the incident by a sitting high court judge and added, "We feel that the firing incident could be avoided, had the state government shown sensitivity to the demands and grievances of the people of Kanchanpur."

He also demanded the government to convene an all party meeting to discuss the issue.