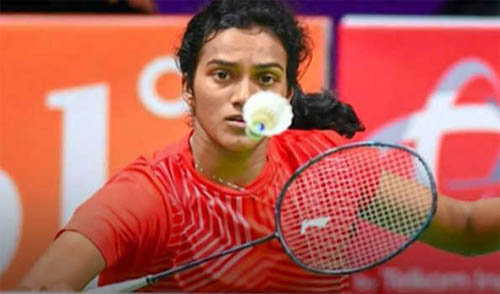 Bangkok, Jan 12 (UNI) On her return to international badminton after the COVID-19 pandemic disruption, World champion PV Sindhu was handed a shocking exit in the opening round of the Yonex Thailand Open Super 1000, as she lost to Denmark’s Mia Blichfeldt, here on Tuesday.

Sindhu, who was playing competitive badminton for the first time since the All England Open in March last year, lost by 21-16 24-26 13-21 to world no 18 Blichfeldt in a 74-minute contest.

With Sindhu's ouster, India’s campaign in women’s singles came to an end as the other contender Saina Nehwal was forced out after testing positive for COVID-19 on the eve of the tournament.

Notably, Saina Nehwal and HS Prannoy had tested COVID-positive earlier in the day and withdrew from the event while Saina's husband Parupalli Kashyap was also asked to quarantine and withdraw as he was in close contact.

No coaches, managers or other personnel are allowed to attend the matches of the Indian players after the COVID-19 cases in the Indian contingent.

In men's singles, world No 13 B Sai Praneeth also bowed out in the first round at the Thailand Open after a 21-16, 21-10 loss to local hero Kantaphon Wangcharoen.

Earlier in the day, the Indian mixed doubles pair of Satwiksairaj Rankireddy and Ashwini Ponnappa registered a 21-11, 27-29, 21-16 win over the Indonesian pair of Hafiz Faizal and Gloria Widjaja, in their first round match that lasted an hour and 12 minutes.

In the women's doubles, the pair of Ashwini Ponnappa and N Sikki Reddy will take on fourth-seeded South Korean pair of Kim So Yeong and Kong Hee Yong, later in the day.