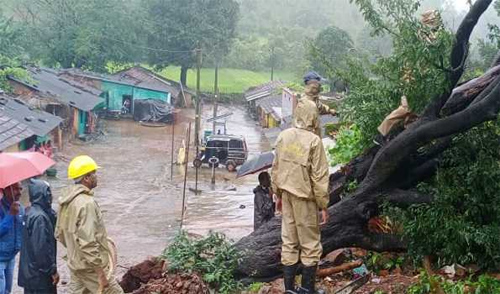 It is likely to move nearly westwards and weaken into a Depression during next 06 hours and into a well marked Low pressure area during subsequent 24 hours.

The weather office predicted heavy to very heavy rain at one or two places over the districts of Nawarangpur, Koraput, Rayagada, and Malkangiri during the next 24 hours and issued an orange warning for these districts.

Meanwhile Special Relief Commissioner P K Jena told newspersons here that the cyclonic storm Gulab has not caused much damage in Odisha. There was neither heavy rain nor high speed wind . No electric infrastructure was damaged in the cyclone. A few trees were uprooted and roads were blocked . The officials were trying to clear the road at the earliest.

However, the district Collectors were asked to submit the damage assessment report within five days.

He said 46,000 people including 1500 pregnant women were evacuated as a precautionary measure before the cyclone.

He said the Malkangiri district received heavy rain fall and certain roads were submerged. But it would be cleared soon. The road in Sunki Ghati in Koraput. District was blocked following a landslide but the road communication would be restored by this afternoon he said.

The SRC said it is raining in Malkangiri and said the impact of the cyclone will come down within next two to three hours.