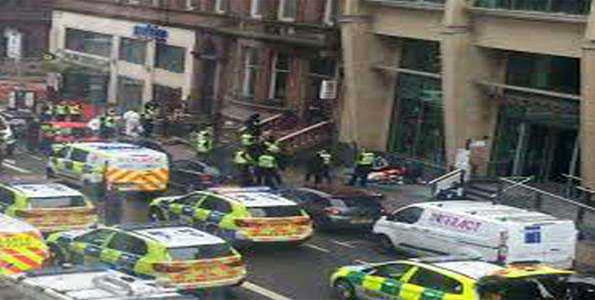 At least three people were killed on Friday in a stabbing incident in central Glasgow, Scotland, local media reported.

There is a heavy police presence on the West George Street in the city center with more than a dozen police vehicles in attendance at the scene. The suspect was shot dead by police.

Sky News quoted eyewitnesses as saying that they saw people, bloodied, being taken on stretchers from the Park Inn hotel in the city center.
The suspect involved in the deadly stabbing incident were shot by armed police officer, Glasgow police confirmed, adding that the incident has been contained and there is no further threat to the public.

"Emergency services are currently dealing with an incident on West George Street in Glasgow. The street is currently closed off and the public are asked to avoid the area at present," said Greater Glasgow Police in a statement earlier.

"We are aware of reports a police officer has been stabbed in an incident in Glasgow city center," the Scottish Police Federation tweeted.

"Further updates will be provided when we are able to do so," said the federation. Armed police were seen entering the hotel with public warned to stay away.
A police officer was also injured in the incident, Assistant Chief Constable Steve Johnson said. "Armed police officers attended the incident and I can confirm that a male suspect was shot by an armed officer," Johnson said in a statement quoted on the Police Scotland Twitter account.

"I would like to reassure the public that at this time we are not looking for anyone else in relation to this incident. I can also confirm that a police officer was injured while dealing with the incident and that officer is receiving treatment in hospital," Johnson added.