Three organization secretaries of BJP will get command of corporation boards 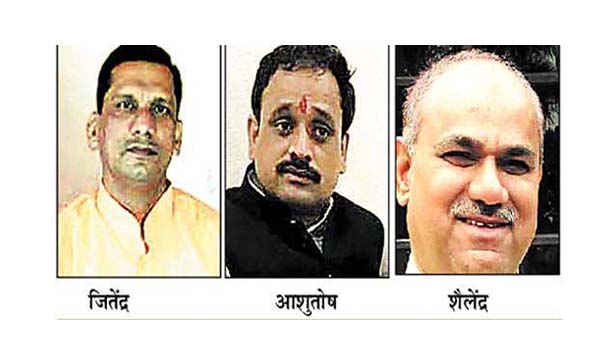 Consent on Jitendra Litoria, Shailendra Barua and Ashutosh Tiwari
Chronicle Reporter, Bhopal
In Madhya Pradesh, there may be appointments in the Corporation/Boards soon. Three divisional organizations of the BJP affiliated to the RSS are preparing to give the command of the Corporation-Blocks, in which the names of Jitendra Litoria (Ujjain division), Shailendra Barua (Jabalpur and Hoshangabad divisions) and Ashutosh Tiwari (Bhopal and Gwalior divisions) have been agreed. An agreement has been made between Chief Minister Shivraj Singh Chouhan and State President VD Sharma regarding these names.
Preparations are on to give big responsibility in the state to these leaders who came to BJP from Rashtriya Swayamsevak Sangh. The BJP is going to give a new look to the organization in the divisions and districts. This is happening for the first time when organization ministers posted in BJP districts are also being removed. There is a preparation to adjust them to the state executive or other posts. Under the new system, the organization ministers will remain the same in the divisional headquarters. Chief Minister Shivraj Singh Chouhan and BJP state president VD Sharma had a meeting on August 1 at Kolar Dam Rest House to fill the vacant political posts of corporations. This meeting lasted for about 10 hours, in which there was also a brainstorming on giving new responsibility to the organization ministers. It is believed that apart from the Chief Minister and the State President, the State Organization General Secretary Suhas Bhagat and Co-Organization Minister Hitanand agreed to give three of the six divisional organization ministers of the state, Jitendra Litoria, Shailendra Barua and Ashutosh Tiwari, in the corporation board. BJP sources say that mainly the names of the chairman, vice-chairman and other posts in the corporation boards, authorities have been decided and department-wise orders can be made in the next few days.

Agree on four Scindia supporters
The inside news is that the Chief Minister has agreed to give place to four supporters of Jyotiraditya Scindia in the corporation. It is believed that Imarti Devi, Aidal Singh Kanshana, Munnalal Goyal and Girraj Dandotia are involved in this, they can be made chairman in the corporation. During the last Bhopal stay, there was a discussion about these four names in the meeting of Scindia with Shivraj and state president VD Sharma.