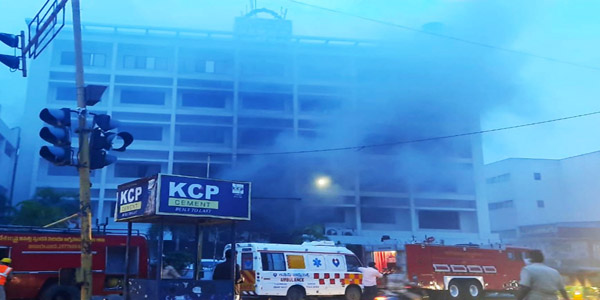 Vijayawada, (UNI) Three Coronavirus patients were killed in a fire that broke out in Covid Care Central, located in Swarna Palace hotel, in the heart of the city in the early hours on Sunday.

A corporate hospital took the hotel on hire basis and set up Covid Care Centre in the hotel. About 30 Coronavirus patients were undergoing treatment in the hotel.

Commissioner of police B Srinivasulu told the media that three persons were killed in the mishap and search was on to find out whether anybody was trapped inside the rooms. He said that two panic-stricken persons jumped from the first floor. However, they escaped with injuries.

The CP said that an electrical short circuit was the reason for flames erupting in the hotel. The flames were put out within 25 minutes, he said.

Official sources said that flames erupted in the first floor of the hotel and spread to the ground floor also. Thick smoke engulfed the two blocks within minutes. Since the hotel has only one exit the patients could not escape from their rooms.

A ladder was put up to rescue the patients. Five fire tenders pressed into service to put out flames.

The rescued patients were shifted to other COVID care centres. There were 30 patients, including five women patients, and 10 doctors and medical staff were in the care centre when the fire accident took place, officials said. The death toll may rise as the condition of three persons is critical, officials said.

Suffocation due to thick smoke was suspected to be the reason for the death of patients, official sources. Minister for Endowment Vellampalliu Srinivas visited the hotel and enquired about the condition of patients with the officials.