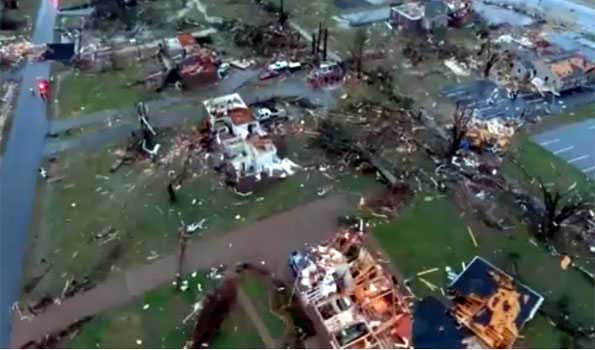 Nashville,  A deadly toronado on Tuesday struck parts of Nashville and central Tennessee and killed at least 24 people and injured several others and also destroyed property worth millions, officials said.The carnage in Tennessee marked the most deadly tornado in the United States since 23 people were killed in Lee County, Alabama, exactly one year ago.The dead were spread across at least four counties, including Davidson and Putnam, Benton and Wilson, according to officials. At least 18 of the deaths occurred in Putnam County alone. Putnam recorded 19 dead but later it was clarified that one of the death was not storm related.
Tennessee Governor Bill Lee declared a state of emergency and said "We have had loss of life all across this state. Besides those confirmed dead, some people are still unaccounted for, he said."

The latest event is the second most deadliest tornado event in the history of Tennessee, according to the National Oceanic and Atmospheric Administration's Storm Prediction Center. On March 22, 1952 twisters killed 38 people in Tennessee, and on February 5, 2008, 22 people died in a tornado according to federal authorities.Two people were killed by flying debris on McFerrin Avenue.More than 50,000 homes and businesses and about 47,000 customers were still without electricity by late Tuesday afternoon, according to the Nashville Electric Service.At least 45 buildings collapsed in Nashville, and police said several building suffered multiple damage, primarily in downtown and the east precincts.President Donald Trump said he would visit Tennessee later this week."We’re working with the leaders in Tennessee including their great Governor Bill Lee to make sure that everything is done properly" Trump said.