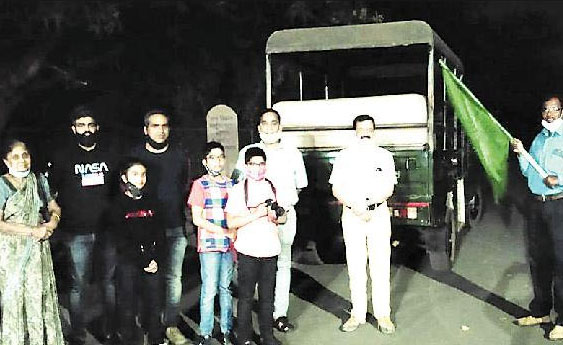 Chronicle reporter, Bhopal-The night-time safari has started for tourists in Van Vihar located in the capital. Today, the entire booking was done for 7pm, 8pm and 9pm at the time of the three safaris. AK Jain, Assistant Director of Van Vihar, told that the tourists enjoyed the scenic beauty of Bhopal and they were thrilled to see wild animals like Chital, Blackbuck, Nilgai, Wild Boar, Hyena, Hare, Jackal etc. The view from the hill Baba Point to the Upper Lake, VIP Road, the tower of Tajul Masajid, the tower of Raja Bhoj Setu, the Takia Tapu is amazing. Jain further said that the tourists looked quite happy with the night safari.

Chief Minister Shivraj Singh Chouhan has said that the Van Vihar of Bhopal is unique and full of natural beauty. There are also many rare wild animals found here. The Van Vihar must be known all over the world.

Chief Minister Chouhan said that Van Vihar Bhopal is a wonderful place. It should be made world famous should be increased by ensuring better arrangements here. Work should be done so that Van Vihar of Bhopal becomes known globally.

It may be noted that night safari has been started in Van Vihar National Park in Bhopal from March 4. This will help in the development of tourism.

Van Vihar of Bhopal, spread over an area of about 445 hectares, has been given the status of a national park. Species of specific trees including Amaltas, Saja, Bel, Babool, Imli, Amla, Tendu and Sitaphal can be seen here. The wild animals here include tiger, leopard, jackal, chital, nilgai, Krishnamagh, rabbit, crocodile, tortoise etc.

Bhojtal near Van Vihar, boasts of natural beauty. Along with this, there are also tourist places like Rashtriya Manav Sangrahalaya and Sair Sapata. Van Vihar attracts about 6 lakh wildlife lovers and tourists every year.

Currently, it generates an annual income of Rs 2 crore 50 lakhs from the activities conducted here. Night safari has been started without affecting the life of wildlife.

The Forest Minister said that the commencement of night safari in Van Vihar National Park will increase tourist attraction. He informed that Van Vihar attracts 6 lakh tourists every year. This leads to an annual income of about 2.5 crore. He said that with the commencement of night safari, there will be a double increase in the number of tourists.

Forest Minister Kunwar Shah said that Chief Minister Shivraj Singh Chouhan had given instructions while visiting Van Vihar on 14 February 2021 that Van Vihar should be made a better Van Vihar model than National Park in Singapore. As a result of the untiring efforts of the officers and employees of the Forest Department, the dream of the Chief Minister was realized by launching a night safari a month before scheduled time.

Bhopal: Forest Minister said that our state is on top in terms of protection of wildlife and treatment of sick wildlife. Dr. Atul Gupta, veterinarian of Van Vihar and wildlife vet team have done the laudable work in treating the injured tigers and wild animals and have enhanced the pride of the Forest Department.

Forest Minister Kunwar Shah flagged off the night safari and himself visited Van Vihar after sitting in the night safari. Principal Secretary Forest Ashok Varnwal, Principal Chief Conservator of Forests and Chief of Forest Force Rajesh Shrivastava and Director of Van Vihar Ajay Kumar Yadav were present on the occasion.

Night-time safari has started for tourists in Van Vihar