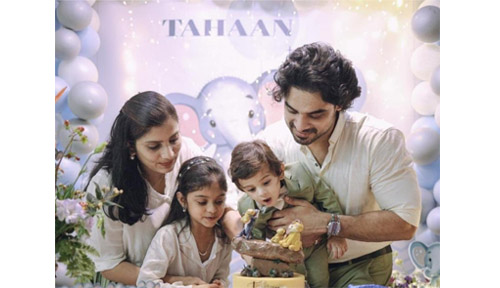 In the photos, Tovino Thomas, his wife Lidiya, daughter Izza and son Tahaan were seen grinning ear to ear and posing adorably.
Tovino Thomas took to social media on Sunday and shared photos from the birthday celebration of his son Tahaan. In the photos, Tovino was seen along with his wife Lidiya, daughter Izza and son Tahaan. The happy family posed for photos grinning ear to ear. Sharing the photos, Tovino wrote penned a heartwarming birthday wish. He stated that the birth of his son was the silver lining of lockdown, as he was able to spend a lot of time with him.
He wrote, “Happy Birthday My Boy. You arrived during the last lockdown, becoming our silver lining then. We're again locked down a year later, but for me it's been a blessing in a way- I was able to spend a whole lot of time with you this one year. Wishing you happier returns of the day.” In June last year, he announced the arrival of Tahaan by sharing a glimpse of his photo.
He had tied the knot with his long-term girlfriend Lidiya on October 24, 2014. His elder daughter, Izza Thomas was born in the year 2016. On the work front, Tovino Thomas has a lineup of films including Minnal Murali, Ajayante Ajayante Randam Moshanam. Minnal Murali which is helmed by Basil Joseph went on floors in December last year. It is being said that the film will be multilingual and it is being scripted by Arun Anirudhan. Ajayante Ajayante Randam Moshanam, on the other hand, will be directed by Jithin Lal who has worked in films such as Godha, Kalki and Ennu Ninte Moideen as a chief associate director.