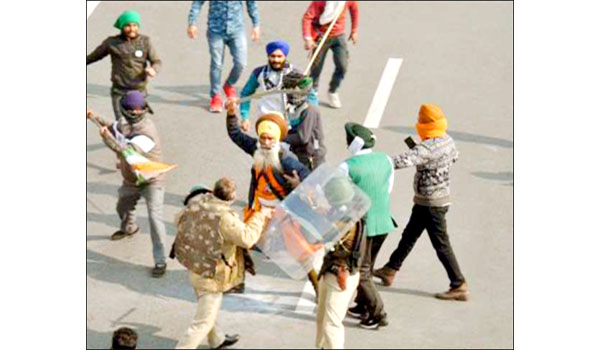 New Delhi, Jan 26 (UNI) Republic Day was marred with clashes between protesting farmers and police in the National Capital as the former broke the security cordon at the Delhi's border and moved towards the historic Rajpath to take march against the newly-enacted farm laws.

Hundreds of protestors managed to reach Red Fort which is nearly seven kilometers away from the Rajpath where the Republic Day parade concluded peacefully at noon.

At the Red Fort, a group of protestors, entered the premises and hoisted flags.

A fierce battle between the protestors and police personnel erupted at the ITO in central Delhi. As per visuals, police tried to halt the protestors. Lathi charge and tear gas were used. Several protestors attacked the police personnel with sticks and stones. Scores of people as well as policemen were injured but no official figure has been announced as yet. Several buses have also been vandalised.

The Pragati Maidan and Akshardham Temple road were queued up with tractors. However, they have been halted by the police with blockades.

At Nangloi, female constables formed a human chain to stop the protestors from moving ahead.

As per reports, the Delhi-Noida Chilla border has been closed for traffic while metro services suspended at various stations in the central Delhi and other places.

The protesters have also entered Delhi from Badarpur border near Faridabad.

All the security cordons apparently failed at the Delhi borders where tens of thousands of farmers were massed to take out a rally, which was allowed by the authorities at designated routes, not Rajpath, against the newly enacted farm laws.

The continuous appeal from police through loud speakers to protestors to not to take law in their hands has failed.

"We request the protesting farmers to not take law in their hands and maintain peace," Additional Public Relation Officer of Delhi Police Anil Mittal said.

The farm unions condemned the violence. "The ones who have reached Red Fort are also farmers. We appeal to them to maintain peace," Manjit Singh Rai, president BKU Doaba Kisan Ekta Union, told mediapersons.

Yogendra Yadav, national president of pro-farmer party Swaraj India, through a video appealed to the protestors to return to designated routes for the march and warned that violence can harm their nearly two-month old protest against the farm laws.

Congress leader Rahul Gandhi too condemned the violence but asked the central government to repeal the farm laws.

"Underlining violence is not the solution to any problem," Mr Gandhi wrote on his official twitter handle.

Shashi Tharoor, Congress MP from Kerala, expressed his sadness over the flags being hoisted from Red Fort.

"Most unfortunate. I have supported the farmers’ protests from the start but I cannot condone lawlessness. And on #RepublicDay no flag but the sacred tiranga should fly aloft the Red Fort," Mr Tharoor tweeted.

No reaction has yet come from Bharatiya Janata Party ruling the centre and Aam Aadmi Party which is in Delhi.

As per the plan approved by the police, the farmers were allowed to take a march at three circular routes from Ghazipur, Singhu and Tikri border only after the Republic Day parade at Rajpath.

The march planned by farmers was to show their unity against the three recently passed farm laws which allows private players to enter the agriculture sector.