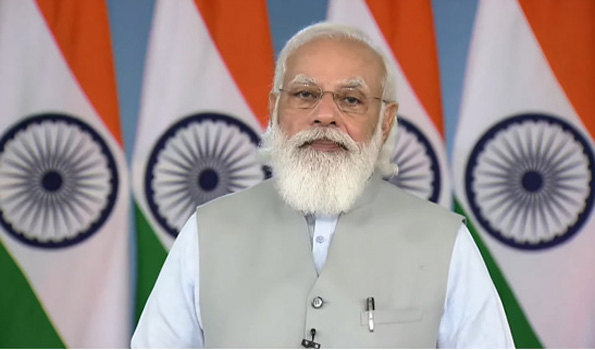 New Delhi,  (UNI) Prime Minister Narendra Modi will host the first India-Central Asia Summit today, with the participation of the Presidents of Kazakhstan, Kyrgyz Republic, Tajikistan, Turkmenistan and Uzbekistan, that will see boosting trade, connectivity and people-to-people links, besides Afghanistan on the table of talks. The Summit, to be held virtually, is set to take our relations to newer heights, the Ministry of External Affairs tweeted. Today's meeting comes over a month after the holding of the third India-Central Asia Dialogue at the level of Foreign Ministers on December 19 last year, which was an in-person meeting, and saw the participation of the Foreign Ministers of all five nations, though Pakistan was at the same time holding a key meeting on Afghanistan. The five Central Asia Foreign Ministers gave the skip to the Islamabad event to travel to Delhi and join the meeting with External Affairs Minister S Jaishankar -- symbolic of the importance in which they hold ties with India. The summit today is also important as the two sides mark the 30th anniversary of diplomatic relations between India and the Central Asian countries in 2022. Besides the situation in Afghanistan, and the new challenges posed due to Covid, the Third India-Central Asia Dialogue had also explored new vistas of cooperation based on the 4Cs of Commerce, Capacity building, Connectivity, and Contact, besides terrorism, trade and economy, development partnership and energy security. Today's meeting is set to see talks on closer cooperation on using the Chabahar Port in Iran for enhancing trade between the two sides, as well as reviving the Turkmenistan-Afghanistan-Pakistan-India (TAPI) gas pipeline – the two topics that were discussed at the December 19 dialogue. Taking forward the International North-South Transport Corridor (INSTC) to boost connectivity would be another major issue discussed. The situation in Afghanistan would be a key subject, especially as three Central Asian countries—Tajikistan, Turkmenistan, and Uzbekistan – share land border with that country and India as well as the five Central Asian nations are keen to cooperate to tackle the dangers of terrorism and drugs, that could spill over from the Taliban-ruled country. In their joint statement in December, both sides had called for the formation of a representative and inclusive government in Afghanistan, combating terrorism and drug trafficking, and the central role of the UN in providing humanitarian assistance for the Afghan people, and preserving the rights of women, children and minorities. India had also held the Delhi Security Dialogue on Afghanistan in November, which was participated by the National Security Advisors of all five countries, besides Russia and Iran. The push for increased connectivity with the landlocked region is important as trade between India and Central Asia stands at just US $2 billion. PM Modi had visited all five countries in 2015, in a historic visit, that emphasized India's keenness to strengthen ties with a region that is part of India's extended neighbourhood, a resource-rich region with which it shares age old ties. With regard to bilateral relations with Kazakhstan, there were five visits by Kazakh First President Nursultan Nazarbayev to India, while PM Modi visited the Nur-Sultan in 2015 and 2017. The two sides have regular joint military exercise KAZIND, and around 8,000 strong Indian community including 5,000 medical students reside there. With regard to the Kyrgyz Republic, there were six visits of Kyrgyz Presidents to India, while PM Modi visited Kyrgyz Republic in 2015 and 2019. Former Kyrgyz President Sooronbay Jeenbekov attended PM's swearing in in May 2019. India has set up five Telemedicine centers in the country, and extended a USD 200 million Line of Credit in 2019. Both countries have a joint collaboration in High altitude research – the Kyrgyz India Mountain Biomedical Research Centre. India also gifted a Bhabhatron to the country. Both sides hold the annual Joint military exercises Khanjar. Around 15,000 Indian students are in Kyrgyzstan. With Tajikistan, there were six visits by President Emomali Rahmon to India, while PM Modi visited in 2015. The two sides have strong cooperation in defence, including the India-Tajik Friendship hospital. Both sides have very similar position on Afghanistan. With Uzbekistan, there have been seven visits by Uzbek Presidents to India, while PM Modi visited in 2015 and 2016. There is cooperation between Andijan region, in the eastern part of Fergana Valley in far eastern Uzbekistan, and Gujarat. The two countries are part of the India-Uzbek-Iran trilateral Working Group on Chabahar port. India extended a Line of Credit of USD 1 billion in 2018, and four projects worth USD 450 million have been approved. Projects under High Impact Community Development are under implementation. Indian Universities like Sharda, Amity and Sambhroom are to set up campuses in Uzbekistan, while Medanta is to set up medical units and centres there. Cadilla is investing USD 50 million for setting up a pharmaceutical plant. India also set up an Entrepreneurship Development Centre in 2019. With Turkmenistan, there have been three visits by Turkmen Presidents to India, while PM Modi visited in 2015. The first Yoga and Traditional Medicine centre in Central Asia came up in Ashgabat in 2015. India also established an IT Centre in 2011 and an Industrial Training Centre in 2002. Coincidentally, Chinese President Xi Jinping held a summit meeting with the five Central Asian countries on January 25. Trade between China and the region stands at USD100 billion.