Traffic again suspended on Srinagar-Jammu highway due to fresh landslides 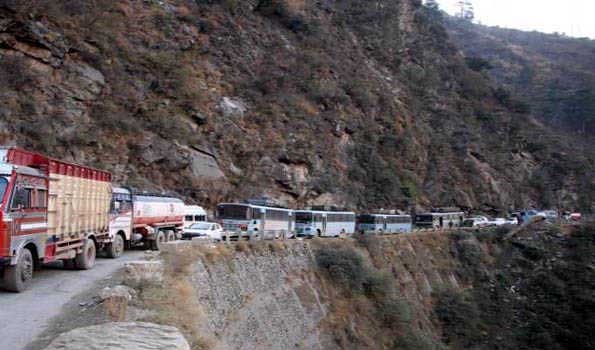 Srinagar,  Traffic was on Thursday again suspended on the 270-km-long Srinagar-Jammu national highway due to fresh landslides and shooting stones, triggered by incessant overnight rain. Massive snow clearance operation by Beacon project was going on to put through the highway, connecting Union Territory (UT) of Ladakh with Kashmir. The 434-km-long Srinagar-Leh highway remained closed for the past about three months due to accumulation of snow and slippery road conditions.The 86-km-long historic Mughal road and Anantnag-Kishtwar road remained closed for the past over two months due to accumulation of snow. The National Highway, the only road linking the Kashmir valley with the rest of the country, was again closed due to landslides and shooting stones, triggered by rain between Ramban and Ramsu overnight. However, the National Highway Authority of India (NHAI) put into service sophisticated machines and men to put through the road, he said. He said once a green signal is received from traffic and NHAI officials, traffic will be resumed. 'There is forecast for more snow and rain during the next 48 hours in Jammu and Kashmir,' he said.

He said only one-way traffic will continue to ply on the highway till further orders on the highway as the road is very narrow and damaged at several places between Ramban and Ramsu where only one vehicle could pass easily. Frequent closure of the highway for the past one week has badly hit the movement of vehicles, particularly carrying essentials and passengers. The historic Mughal road, connecting Shopian in south Kashmir with Rajouri and Poonch in Jammu region remained closed for the past over two months. It will take about two more months to put through road which is seen as alternative to Srinagar-Jammu highway. The Anantnag-Kishtwar road also remained closed due to snow. There was fresh snowfall during the past 24 hours at several places on both the roads.