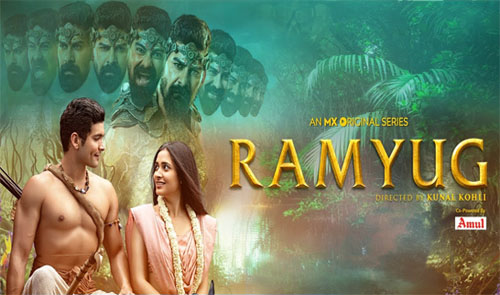 Many of us have grown up listening to the epic story of the Ramayana, one of the largest ancient epics in world literature. As Indians, we’ve seen this marvellous story brought to life across various dramatic traditions - be it family sagas, courtroom dramas, dance-dramas or in shadow-puppet theatres.
Amidst heightened anticipation after the launch of ‘Jai Hanuman’ featuring the voice of megastar Amitabh Bachchan along with Ustad Zakir Hussain, MX Original Series Ramyug is the latest visual interpretation of this time-honoured text that uses modern technology in a never seen before manner to narrate the epic. Directed by Kunal Kohli, this magnum opus narrates the tale of love, devotion, sacrifice & revenge - set against a backdrop of stunning visuals, grandeur, scale, and powerful dialogues that bring alive this primordial era. The trailer for this magnificent spectacle is out now and all episodes of this series go live on May 6th, 2021 only on MX Player.
Touted to be one of the most ambitious projects in the entertainment industry, MX Original Series Ramyug is the first mythological web series that has been produced from the ground up and will now hit the digital screen on 6th May. Talking about the scale at which this grand series has been mounted on, director Kunal Kohli says, “The story of Rama has been retold by some of India's greatest writers both in Sanskrit and regional languages. I am honoured to have been able to breathe life into this narrative for younger audiences on an unparalleled scale with the help of in-depth writing, VFX, visually appealing direction, editing and post-production efforts.”
He further added saying, “The country is going through an extremely difficult time and we hope that the re-telling of this epic tale will motivate and give strength to families that can sit together and watch this story.”
The series celebrates the life and journey of Rama, prince of Ayodhya and his righteous rule (Ram-raj) that inaugurated a golden age for all mankind. The majestic series sees an ensemble cast of Diganth Manchale, Akkshay Dogra, Aishwarya Ojha, Kabir Duhan Singh, Vivan Bhatena, Navdeep Pallapolu, Anish John Kokken, Shishir Mohan Sharma, Jatin Sial, Shweta Gulati, Suparna Marwah, Mamta Verma, Tisca Chopra, Dalip Tahil, Anup Soni, Vikram Singh Chauhan, Hemant Kumar Pandey, Arun Singh, Ravi Jhankal, Shaan Grover, Amit Madan Gaur, Teena Singh and Danish Akhtar in pivotal roles.