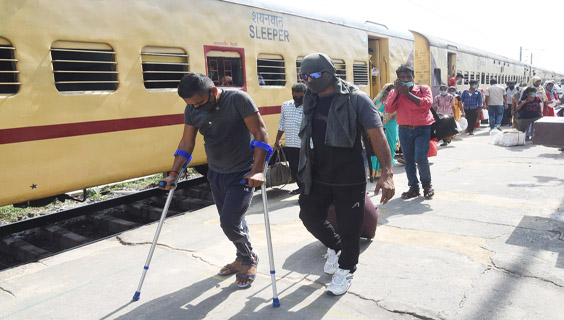 Indian Railways will start special trains for 15 cities, partially resuming operation of passenger trains from Tuesday, which will halt at a total of 48 stations en route, in which passengers will have to reach the station 90 minutes before departure.

According to the Ministry of Railways, these trains will depart from the New Delhi railway station to various parts of the country including Ahmedabad, Bilaspur, Jammu Tawi, Chennai, Patna, Secunderabad, Ranchi, Bhubaneswar, Mumbai Central, Bengaluru, Dibrugarh, Madgaon, Howrah, Thiruvananthapuram, and Agartala.

These trains will be fully air-conditioned and will have air-conditioned first, second and third class coaches. These trains will run according to the timelines and speed of Rajdhani Express and will stop at a total of 48 stations en route. In this way, passengers of a total of 63 stations will benefit from running these trains. Their fare will also be equivalent to the fare of Rajdhani Express.

According to the Railway Ministry, since the Railways will not provide food, water, and snacks to the passengers, the catering fee will not be included in the fare. Prepaid food and e-catering facilities will be inactive at the time of booking. Blankets, pillows, and sheets will also not be given to anyone in the car. Trains will also not have curtains. Passengers have been asked to bring their own sheets.

The temperature inside the coach will be kept regulated. Passengers will be encouraged to bring their own food and water from home. However, water bottles and limited type packet food items will be available on payment.

According to official information, tickets will be issued through online booking on the Indian Railway Catering and Tourism Corporation (IRCTC) website. Any passenger can book a maximum of seven days in advance and will be allowed to cancel the ticket up to 24 hours before the journey. Fifty per cent of the amount will be refunded on cancellation of ticket. There will be no refund on cancellation of tickets within 24 hours before the journey.

No waiting list or RAC ticket will be issued. No ticket counter will open at railway stations. Neither, will an agent will be allowed to book. Train Ticket Examiners (TTE) will not be able to make tickets. In this way ticket booking will not be done in any other way except through the IRCTC website. Unreserved tickets will not be valid.

Passengers must follow social distancing at the station and in trains. After landing at the destination, the passengers will have to go through the health protocol prescribed by the government of that state.

Zonal railways have been asked to make separate entry and exit gates for arrival and departure at all stations, standing on platforms and boarding the train in such a way that passengers coming and going are not confronted.

Zonal railways will have the responsibility of ensuring compliance with social distancing and safety and hygiene protocols in stations, and trains. All travellers will be encouraged to download the Arogya Setu App on their mobile phones.