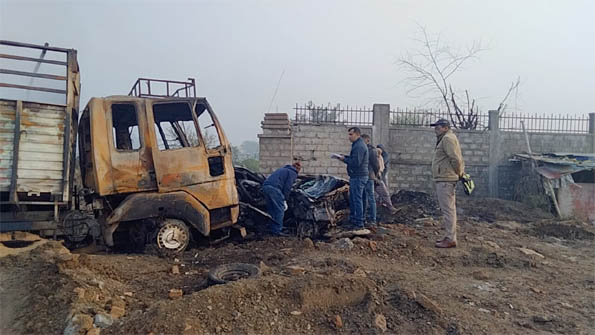 Chronicle Reporter, Bhopal
Two people were burnt alive in a car in Rewa. His car was first hit by a transformer loaded truck, then dragged for about 100 metres. The car was fitted with a CNG gas kit, due to which it caught fire after the collision.
The car occupants fought valiantly to escape. In this struggle even one's hand was broken. One in the car was the orchestra owner, the other the driver. The truck was also completely gutted in the fire that broke out in the car. The truck driver fled after the accident.
This accident happened near JP overbridge of Chorhata police station area of Rewa district at around 2 pm on Sunday night. The skeletons of both the youths have been found in the car. Both have been identified. Collector Manoj Pushp, SP Navneet Bhasin, ASP Anil Sonkar, CSP Shivali Chaturvedi, Chorhata police station in-charge Inspector Avnish Pandey reached the spot on Monday morning. FSL team has also investigated.
The transformer loaded truck hit the car from the front. The truck dragged the car and took it about 100 meters away. After this both the vehicles caught fire.
car and truck burn together
Chorhata police station in-charge inspector Avnish Pandey said that the deceased have been identified as Chhote Lal Shukla alias Rinku (42) son of Indrabhan Shukla, resident of Mantolwa Hall Duwari (Rewa) and his driver Amit Agarwal (30), resident of Dhekha Bakia Colony (Rewa). Chhote Lal was the orchestra owner.
On reaching the overbridge, the truck hit the car from the front. According to eyewitnesses, the truck then dragged the car for some distance. The driver fled leaving the truck. Meanwhile the car caught fire. Car and truck were completely burnt.