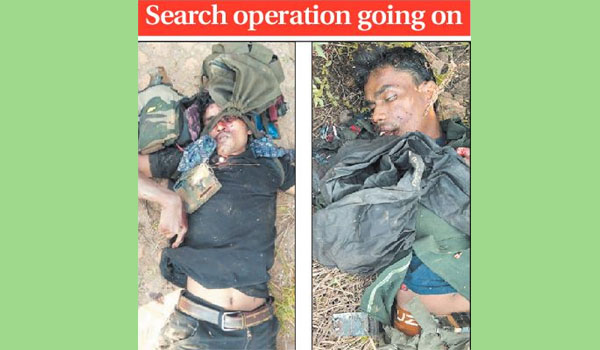 There was information about presence of more than 20 Naxalites in Supkhar forest
Search operation going on
(Prakash Dubey)
Chronicle Reporter, Balaghat
Major action was taken against Naxalites on Wednesday morning, in which two Naxalites were killed, while one got injured.
According to the information, in the encounter between the security personnel and Naxalites in the border area of ??Balaghat-Mandla and Chhattisgarh, there was heavy firing from both the sides, in which two Naxalites were killed. The killed Naxalites are being told of the Kanha Bhoram Dev Committee. During the joint operation of Hawk Force, District Police and CRPF, more than 20 Naxalites are being claimed, who fled after seeing the retaliatory action. Security personnel carried out this action on the information of presence of armed Naxalites in the area. During the joint operation of CRPF, District Police and Hawk Force personnel in the forest of Supkhar Motinala area, three Naxalites armed with AK-47 and guns started firing indiscriminately on the police. In response to which the security force personnel also surrounded and fired on the Naxalites in which two Naxalites were killed, while a woman Naxalite left AK-47 and fled along with other Naxalites. According to Mandla SP Yashpal Singh Rajput, the search operation is still going on in the forest. Intensive search is on for the forest route through which the remaining Naxalites fled. It is being told that apart from the slain Naxalites, there was a group of about twenty Naxalites who were in the mood for some major incident. It is notable that Naxalites had thrown pamphlets in Khursipara village to celebrate Naxalite week. Earlier in June 2022, there was an encounter between Naxalites and police in Balaghat, in which three Naxalites who had a prize on their head were killed.
According to the Balaghat police, the two Naxalites killed belong to the Kanha Bhoramdev Dal. In which a Naxalite has been identified as DVC Ganesh. The identification of the others is underway. AK-47 and 315 bore rifles have been recovered from the deceased Naxalites.