Two children are testing positive in every 20 investigations 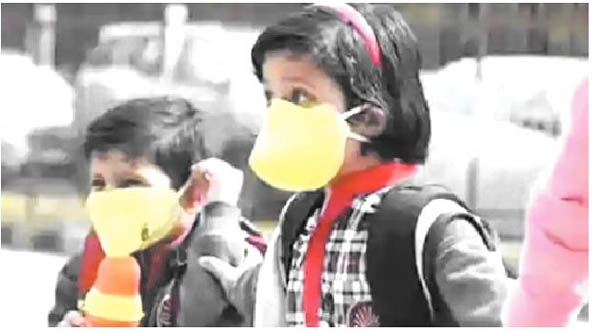 = More symptoms seen in children this time
Chronicle Reporter, Bhopal
Corona virus infection is at peak in the capital. Every day, reports of more than 800 people in the city are coming Corona positive. At the same time, the special thing is that in the second wave, corona is becoming more contagious for children.
In the capital, two children out of every 20 of the investigations are also getting infected. Right now, four to five percent of the total infected children are being found below the age of 13 years. According to the experts who treat corona victims, in the first wave, there were a small number of children who lived among the total patients.
About 70 percent of them were without symptoms and 30 percent were mildly symptomatic. The most common symptom in children in the new wave is fever and mild cough. High fever (103) degree is coming in about 30 percent of the children. Doctors are considering the change in behavior of the virus as the major reason for this.
The infestation of children can be gauged from the fact that on April 11, in the list of 826 infected in Bhopal district, 29 were under 13 years of age.
The effect of infection has doubled in children
If we believe on the government data, in the last wave, one child was getting infected out of 20 infected. Right now, two children are getting infected in 20 tests. Pneumonia is also being found in two children. There are currently nine children admitted in Hamidia. Two of them are below two years old. They are getting fever up to 103 degree. The big reason for this is that in the first wave the whole family was not infected. Even the children were not going out. Now the virus is more contagious. The whole family is in the grip, then how can the children survive.
= These precautions are necessary
Teach children to wash hands frequently and thoroughly.
Tell the children that there is a risk of corona infection by touching public places.
Make a habit of applying masks to other children.
Do not go out if it is not very important.
= Last time less than one percent children were being infected.
Last year, the number of children among the infected was less than one percent. Right now about five percent are getting infected. However, it is a good thing that they are not reaching at a critical stage. Some are mild and some have moderate symptoms like high fever and cough. The virus has become so contagious that the whole family is in the grip, so children are also falling prey. Even if children do not show any symptoms, they can spread the disease to others.