UP cruising ahead in BJP era: Yogi 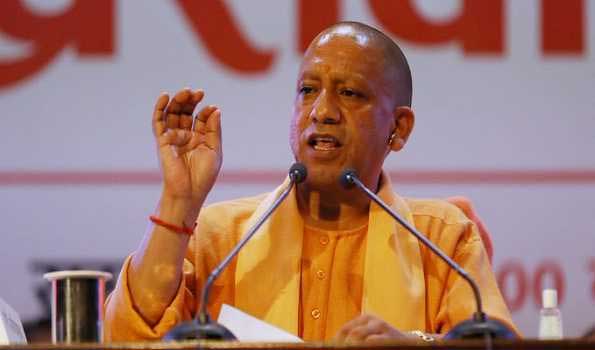 Lucknow, On the eve of the third anniversary of the BJP government in Uttar Pradesh on Wednesday, Chief Minister Yogi Adityanath said that the state was cruising ahead in development, infrastructure, controlling law and order and working on the ideology of ' Sabka Sath, Sabka Vikas"."UP has turned into the top state in the country in implementation of central schemes and we took the challenges thrown by our predecessors and turned into our opportunity to take the state in the era of development," the CM said while claiming that Prime Minister Narendra Modi too have appreciated UP on different occasions form its achievement.Under the shadow of coronavirus scare forcing the state government to shed the pomp and show and go for the somber celebration, the CM addressed a press conference here where he presented his government's three year report card. He also released a booklet of the development in all the 75 districts of the state separately.Yogi Adityanath took the oath of the UP CM on March 19, 2017 and thus became the first BJP CM in the state to complete three years term in the office.Leading from the front, the CM, himself went through the process to prevent spread of Coronavirus along with his cabinet colleagues and BJP leader before the press conference.

In his over one hour long address, the CM stressed on the infrastructure development projects and how the government took strict action on the criminals to remove the fear from the minds of the masses. He also said that three lakh government jobs were generated during the period and in the remaining two years,it will go up by many folds.“We are working on a transparent manner. We have given appointment in state sector to over 3 lakh people and after industrial units start operation this will generate employment to 35 lakh people,” the Chief Minister said.“I want implementation of projects of Central and state governments. Effective implementation of schemes will ensure that benefits reached the identified sections effectively and in a transparent manner,” Yogi said.He said that the upcoming international airport at Jewar has already been included in the 100 big projects of the world.

The feather in the cap of Yogi was successful implementation of the Pradhan Mantri Awas Yojana under which 3 crore houses have been constructed to the deprived and poor people in rural areas and more than 30 lakh houses in urban areas. Under the Saubhagya scheme, Uttar Pradesh ranks first in the country by providing free electricity connection to more than 1.24 crore households. Under the Ujala scheme, 2 crore 60 lakh 80 thousand 668 LED bulbs have been distributed.The CM said that the last three years have seen improvement in crime control. In view of better law and order, police commissioner system has been implemented in Lucknow and Noida.He said the result of zero tolerance policy on law and order is that organized crime is reduced in 2019 as compared to 2016. All the major festivals, religious processions, fairs were organised successfully. “A provision of 20 crore was made for the establishment of Uttar Pradesh Police Forensic University. Besides, 75 anti-power theft police stations, 4 women police stations, and 4 economic offences police stations have been set up to control crime,” he said.

Government’s achievement in irrigation sectors has surprised many. The state government has completed 8 projects including Baan Sagar Project, Pahari Dam Project, Patharai Dam Project, Jamrar Dam Project, Maudha Dam Project, Pahuj Dam Project, Lahchura Dam and Gunta Dam, which has been pending for 46 years. With the completion of these projects, 2.16 lakh hectare irrigation capacity has increased.Through single window system, Nivesh Mitra, operated to facilitate setting up of industries in UP, 70 services of 20 departments are being made available on-line to the investors. Government has issued 97849 NOCs to entrepreneurs through Nivesh Mitra Portal.The state government implemented new industrial policy and made 21 new investment friendly policies. MoU worth Rs 4.68 lakh signed for investment in Investors Summit organized in Lucknow in February 2018.Through the first and second ground breaking ceremonies, 371 projects with an investment of about Rs 2 lakh crore were implemented and about 5 lakh people were employed.

UP will get a boost with the foundation of the Defence Industrial Manufacturing Corridor in Bundelkhand. This corridor, to be built with an investment of 50 thousand crore rupees, will create employment of 5 lakh people."The government realised what entrepreneurs needed and hence it started spreading network of quality roads across the state and repairing the old ones. Power supply was improved and now quality electricity is available across the state with providing power connections to 1.67 lakh villages.To boost industrial development of eastern Uttar Pradesh (Purvanchal), about 341-km-long Purvanchal Expressway is under construction through the state’s own financial resources. A decision has been taken to construct a 91-km-long Gorakhpur Link Expressway to link Gorakhpur with Purvanchal Expressway.Similarly, construction of 296-km-long Bundelkhand Expressway is also on the anvil. Another Ganga Expressway is on the anvil that will link west UP (Meerut) with eastern part of the state (Prayagraj). This expressway will pass through Meerut, Amroha, Bulandshahr, Budaun, Shahjahanpur, Farrukhabad, Hardoi, Kannauj, Unnao, Rae Bareli, Pratapgarh and Prayagraj districts.

The high point of Yogi’s three-year rule has been the way he fulfilled the promises made by the Bharatiya Janata Party to the people. A record purchase of 52.92 lakh metric tones of wheat was made from 11,27,195 farmers under price support and on-line payment of Rs 9231.99 crore was made within 72 hours.UP is the first state where maximum number of farmers (approximately 28 lakh) benefited from the Prime Minister Kisan Samman Yojana. Besides, many closed and sick sugar mills were revived and in one year the government carried out record purchase of sugar cane.These achievements ended in national awards as the Government UP won 12 awards for the first time for successful execution of scheme implemented by the Union Ministry of Rural Development. Meanwhile, on the third anniversary, Yogi Adityanath government released booklet of development projects of all the 75 districts seperately and it will be released by the in-charge ministers in coming days. Today, the CM released the booklet of development schemes of the state capital.