UP govt to bring law to prevent Love Jehad, to give houses to poor on land retrieved from mafias 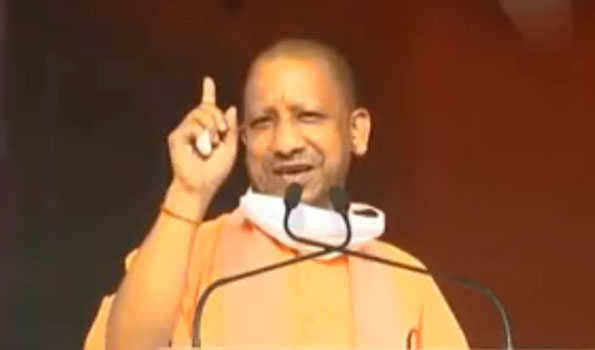 Lucknow, Oct 31 (UNI) Uttar Pradesh chief minister Yogi Adityanath has announced that his government will bring a law to prevent Love Jihad while his government will distribute houses to the poor on the land illegally acquired by the mafias and criminals.
The UP CM said his government is already busy demolishing properties of the mafia elements who have acquired them illegally. “ We will use that lands to build houses for the poor,’’ he said while addressing the public meetings in Deoria and Malhani (Jaunpur) assembly constituencies on Saturday where by-elections would be held on November 3 next.
Referring to a recent observation of the Allahabad High Court that said that changing religion is not necessary for marriage, the Chief Minister said the government will soon bring an effective law. “Many of our sisters and daughters became victims of `Love Jehad’. They were deceived by the persons using forged name and identity,’’ he pointed out making it clear that from now onwards, the government will ensure that this does not happen and those found involved in such practices will be dealt with strictly.
Launching a frontal attack on the Samajwadi Party functionaries, he said they are indulged in forming a new chain of mafias and goons so that they can instigate riots. “…But they (SP) will not succeed in their plans and all those who even think of it will be sent to jail, he added calling upon the people to discard those who support and patronize the mafias of the state.
The CM came down heavily on the SP and Bahujan Samaj Party (BSP) for their corrupt designs during the previous regimes and said instead of doing something worthwhile for the farmers, these people sold off their sugar mills. “How dare they show you their face and seek votes,’’ he asked.
He said the policies of his government as well as the government at the Centre are clear from the day they came to power. The mantra is development and the ideology is `Sabka SaathSabka Vikas,” he said elaborating on how his government succeeded in the distribution of free gas connections and electricity in the lakhs of households during three and a half years.
The UP CM asserted that his government devoted itself to the welfare of youth, poor, women and farmers without being resorting to appeasement because for the BJP, the public service has never been a political agenda.
He said his government has given employment to about 30 lakh persons including returnee migrants and provided jobs to about 3.50 lakh youths in the most transparent manner. He said the new investment which is coming to the state will generate more employment for the youths.
During his day-long tour, the CM also visited Varanasi, the parliamentary constituency of Prime Minister Narendra Modi and reviewed the development works including the work on Kashi Vishwanath Corridor.