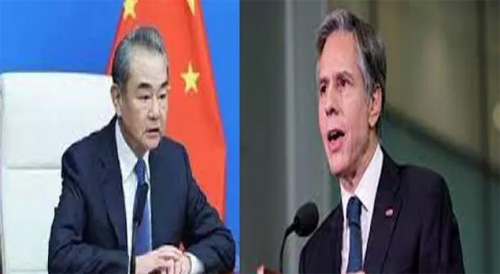 Washington, Jan 27 (UNI) US Secretary of State Antony Blinken and Chinese Foreign Minister Wang Yi discussed the economic risks that will arise with the escalation of Russian aggression. According to an official statement by the US State Department, Blinken on Wednesday conveyed to Wang that "de-escalation and diplomacy are the responsible way forward" to avoid a crisis. Both leaders also discussed on on ways to advance work together following President Joe Biden's virtual meeting with his Chinese counterpart Xi Jinping. His comments came as other Western leader issue repeated warnings that Russia would have to pay a heavy price for invasion. According to BBC, Moscow has built up troops at the border, with some 100,000 Russian soldiers deployed in the region. Meanwhile, Russia has accused the US and NATO for "escalating tensions" in the region and also denied that it plans to invade Ukraine.

US Secretary of State Antony Blinken