US election 2020: Joe Biden gets big boost before Super Tuesday 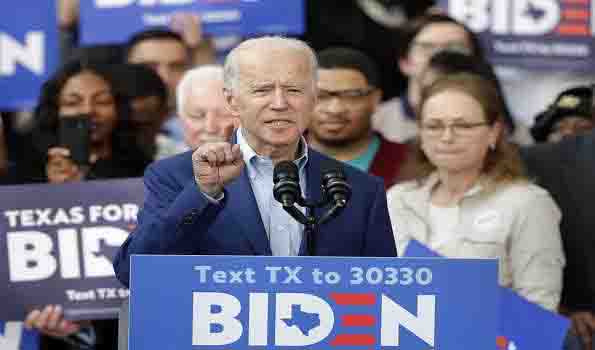 Dallas, Democratic presidential candidate Joe Biden on Monday got a shot in the arm just before Super Tuesday when three of his former rivals endorsed him and shared the stage with him.Amy Klobuchar, Pete Buttigieg and Beto O'Rourke all endorsed former US vice-president in Dallas, Texas.On Super Tuesday, voters in 14 states will pick their preferred Democratic candidate for November's election.However, Senator Bernie Sanders is still the front runner from the Democratic Party. Divisions within the Democratic party came out in the open when moderates called on party figures to unite to stop Vermont Senator Bernie Sanders, and self-described democratic socialist, from becoming the party's nominee to take on President Donald Trump, a Republican. Mr Sanders believes that the big money donors to the Democratic party want to stop him in the tracks.The Democratic party race is now down to five candidates from the earlier twelve and now includes Elizabeth Warren, Michael Bloomberg and Tulsi Gabbard, apart from Joe Biden and Bernie Sanders. Except for the Hawaiin Congresswoman Ms Gabbard, all the other Democratic hopefuls are septuagenarians. Ms Klobuchar, a Minnesota senator, suspended her campaign and endorsed Mr Biden on Monday. Appearing alongside Mr Biden on Monday night, she said: "If we spend the next four months dividing our party and going at each other, we will spend the next four year watching Donald Trump tear apart our country."Mr Buttigieg, a former mayor from Indiana who dropped out of the race on Sunday, said at another event with Mr Biden: "I'm looking for a leader, I'm looking for a president, who will draw out what's best in each of us." Mr Biden, 77, told reporters that Mr Buttigieg, 38, "reminds me of my son Beau", who died in 2015. Former US congressman Mr O'Rourke, who dropped out of the race last November, also appeared on stage with Mr Biden.Mr Biden scored an overwhelming victory in South Carolina during the weekend which put him as one of the front runners after struggling in the first three Democratic leadership contests earlier. Earlier on Monday, Mr Biden also picked up endorsements from former Obama National Security Adviser Susan Rice, former Senate leader Harry Reid and several members of Congress, according to a BBC report. Former mayor of New York City and billionaire Mike Bloomberg, who is pitching to moderate Democratic voters like Biden, will be appearing on a 2020 ballot for the first time on Tuesday. Mr Bloomberg has reportedly spent half a billion dollars in his presidential bid.Meanwhile at a campaign rally in North Carolina on Monday night, President Trump sought to raise doubts about Biden's mental acuity by highlighting the former vice-president's gaffes. He mentioned that Mr Biden had referred to Super Tuesday as "Super Thursday" and asserted in a TV debate that 150 million people had been killed by guns since 2007.Mr Trump said that if Mr Biden wins the White House, "they're going to put him into a home, and other people are going to be running the country, and they're going to be super-left radical crazies".After the first four primaries Mr Sanders is leading with 60 delegates needed to win the Democratic White House nomination.Mr Biden has 54 and Ms Warren eight.On Super Tuesday, 1,344 delegates will be up for grabs.California, Texas, Virginia, Massachusetts, Tennessee, Alabama, Arkansas, Oklahoma, Minnesota,Vermont, Colorado, Utah, North Carolina and Maine - as well as American Samoa, cast ballots on Tuesday.