US urges new Iranian government to return to nuke talks 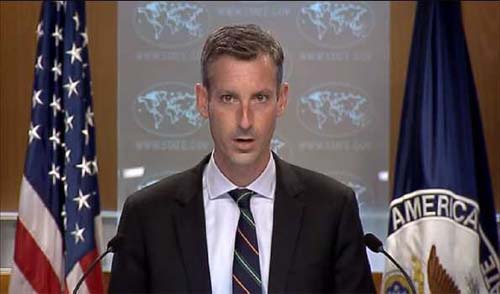 Washington, Aug 6 (UNI/Xinhua) The United States on Thursday urged the new Iranian government under President Ebrahim Raisi to return to negotiations to restore the 2015 nuclear deal, reiterating the diplomatic opportunity will not last forever.
Raisi, who was elected as Iran's new president on June 18, formally assumed office after the supreme leader's decree on Tuesday and the swearing-in ceremony in the parliament on Thursday.

"Our message to President Raisi is the same as our message to his predecessors... The U.S. will defend and advance our national security interests and those of our partners. We hope that Iran seizes the opportunity now to advance diplomatic solutions," State Department spokesperson Ned Price told reporters in a daily briefing.

After six rounds of indirect negotiations in Austria's capital Vienna since April, Washington and Tehran still have serious differences over how to revive the nuclear deal, formally known as the Joint Comprehensive Plan of Action (JCPOA).

"This process cannot go on indefinitely," Price said. "The opportunity to achieve a mutual return to compliance with the JCPOA won't last forever."
In his swearing-in ceremony on Thursday, Raisi rejected concerns about the country's nuclear program, calling it "peaceful." He said Iran supports and welcomes any diplomatic proposal for the lift of sanctions.

The new Iranian president also dismissed the policy of pressure and sanctions, saying that the anti-Iran pressures will not cause the Iranian people to give up their legal rights.

The U.S. government withdrew from the JCPOA in May 2018 and unilaterally re-imposed sanctions on Iran. In response, Iran gradually suspended parts of its JCPOA commitments from May 2019.