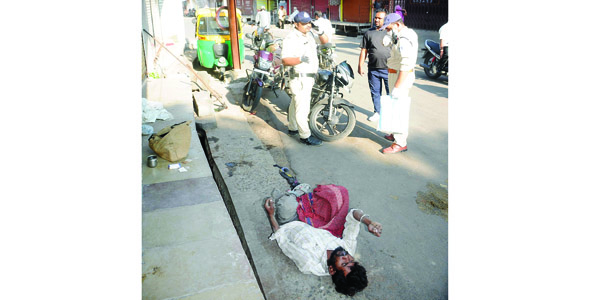 At least 11 labourers died within 24 hours on Thursday after they consumed an intoxicant named ‘Potali’ in Ujjain. Chief Minister Shivraj Singh Chouhan has ordered probe by SIT in the incident.

Ten persons have been taken into custody and four police officials have been suspended so far in connection with the tragedy. Those suspended include TI of the Kharakuan police station, where the incident occurred. Among the arrested were Sikandar, Gabru and Yunus who produced the drink and sold it to local workers.

The bodies of two labourers were found at Chhatri Chowk Sarai under the jurisdiction of Kharakuan police station on Wednesday morning. Soon after, the police found more dead bodies and by Thursday morning, the number of victims rose to 11. Bodies of all the deceased have been sent for autopsy. State Chief Medical and Health Officer Dr Mahavir Khandelwal informed that all eleven died after consuming ‘Jhinjhar Potali’, a kind of local intoxicant.

SP Ujjain Manoj Kumar Singh also confirmed the same. Two others had fell unconscious after consuming the intoxicant and have been hospitalised. The city administration cracked down on pharma stores selling spirit illegally including Khanna Surgical Store and Gupta Surgical Store in Ujjain’s Dawa Bazaar area.