Ujjain will be decorated 5 days before Modi's arrival 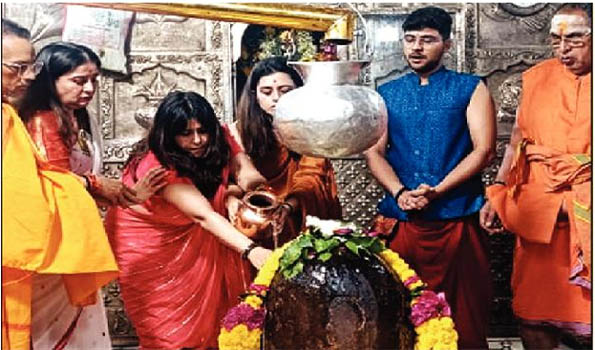 Chronicle Reporter, Ujjain
Prime Minister Narendra Modi has been scheduled to come to Ujjain on 11 October. After this, preparations have been started for his welcome at the administration level. The entire Ujjain city will be decorated five days before Modi's arrival.
Prime Minister Modi will inaugurate the Mahakal Path in the first phase of Mahakal temple expansion along with Mahakal darshan in Ujjain on 11 October. To make this visit of Modi memorable, religious, cultural programs will be held in Ujjain city. Also, the common people of the city will also be connected to these programs.
Religious campus and night garden built-Mahakal Corridor will be the first such corridor in the country that will be seen as a religious campus. It is decorated here through about 200 idols and murals related to Shiva, Shakti and other religious stories. Devotees will know the unheard stories of Shiva from them. Sapta Rishi, Navagraha Mandal, Tripurasura Slaughter, Virajit Shiva in Kamal Tal, 108 pillars have huge statues of Virajit Nandi at the grand entrance. The Mahakal Corridor will be for many features. The country's first night garden has also been built here. Prime Minister Narendra Modi is going to come to Ujjain on 11 October to inaugurate this corridor. Keeping this in mind, Chief Minister Shivraj himself first came to observe this corridor and also instructed to decorate the city.
Ekta Kapoor, Riddhima worshiped Mahakal
Film actor Jitendra's daughter Ekta Kapoor and film actress Riddhima Dogra came to Ujjain on a religious journey on Tuesday. During this time they reached the Jyotirlinga Mahakal temple and worshiped God from the sanctum sanctorum and took blessings for success. After worshiping in the Mahakal temple, Pandit Raman Trivedi blessed both the artists. Ekta Kapoor and Riddhima also went to the famous Mangalnath temple and also got Bhatpuja done by Pandits there. Both stayed in temples for a long time. They also saw Harsiddhi and Kalabhairav.